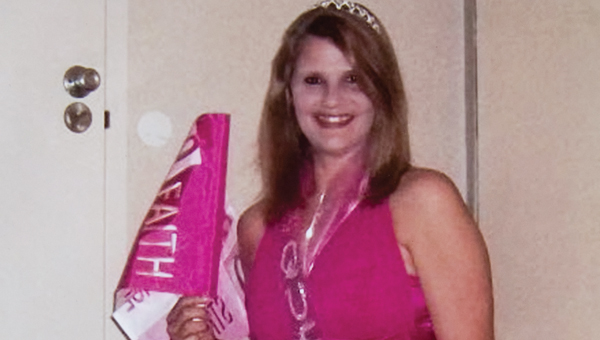 Shannon Cauthen recently returned to Panola as a national beauty pageant winner, but that’s not the biggest thing she’s won — Cauthen is also winning the fight against cancer.

Her first bout with cancer came 11 years ago, when she was 26, but she managed to fight it off.

“Three years later, it came back, but this time it was in my back,” Cauthen said. “I did chemo and radiation for months. Last year, more spots came up.”

Following another round of chemotherapy, she has been declared cancer-free for now, but she still goes back every three months for a checkup.

Those regular visits helped open the door for her entrance in the 2011 Miss National American Cancer Society pageant.

Cauthen’s name was entered into the running by her practicioners in Birmingham.

“I got a call that I had been entered in it, and I flew out there,” she said.

Out of 75 participants, Cauthen brought home the title and crown.

“All of us in the pageant have had cancer,” she said. “Winning it was a great experience.”

Cauthen is a resident of Panola, and she said she received support from the community in helping her get to Arkansas, particularly from Bill and Kathy Easterling.

“Kathy and Bill are the ones that made it happen,” she said. “I really owe them a big thank you.”

Cauthen works at the Lucky Dollar in Panola, and she said she enjoys being with her family when she’s not at work.

She has three daughters, Britney Cauthen, Brandy Cauthen and Brianna Hebert, one son, Jessie Burgans and one grandson, Logan Frazier.