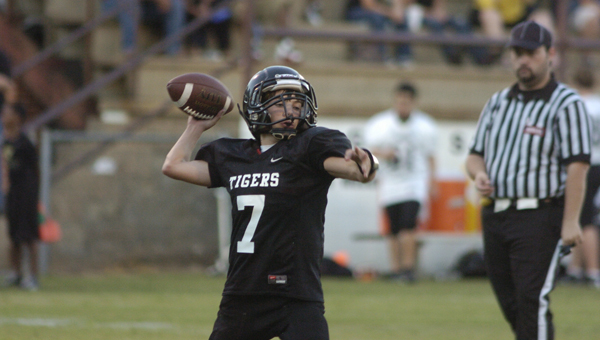 “We were unorganized and not ready to play,” first-year head coach Daniel Ingram said. “(The responsibility for that) falls on me.”

The loss dropped the Tigers to 2-2 on the season.

After Greenville’s offense stalled on a pair of drives, Luverne extended its lead with another long scoring run and a two-point conversion that boosted its lead to 14-0.

“We were arm tackling,” Ingram said.

Following adjustments to its offensive game plan, Greenville began to have success moving the football, but a pair of fumbles ended promising drives.

The Tigers finally got on the scoreboard when quarterback Barrett Bush connected with wide receiver Timmy McCall for a touchdown. Bush then found Jaquan Smith for the two-point conversion to trim Luverne’s lead to a single score, but the Tigers would be unable to draw any closer.

Greenville will be back in action Thursday when it travels to Wetumpka. A contest between the schools’ seventh grade teams will begin at 5:30 p.m. with the middle school game set to follow.