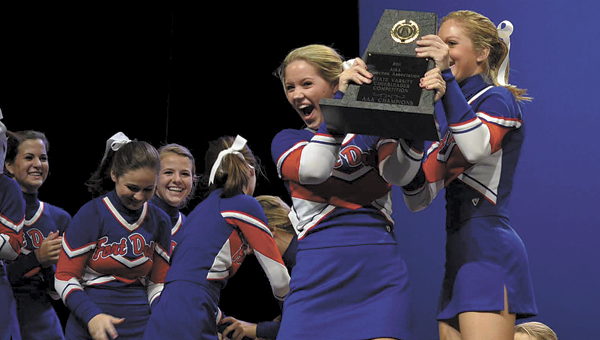 For the second time in less than a year, Fort Dale Academy staked claim to an AISA Class AAA state championship.

On Saturday, the Fort Dale Academy cheerleaders and dance team walked away from the Montgomery Performing Arts Center with a state title and runner-up finish, respectively.

“In the 12 years I’ve been doing this, this is the first time we’ve competed at this level with this kind of material,” cheerleading coach Marianne Russell, said.

The Montgomery Performing Arts Center was full to watch multiple squads cheer and dance throughout the day.

“There were four [teams] in the dance competition, and then the cheerleaders were both junior varsity and varsity were split up by divisions within the AISA.”

There were three divisions, Class A, AA and AAA. The cheerleading squad competed against two other schools.

After learning the routine in August, the cheerleaders practice for a solid three weeks learning a two-minute and 20-second routine that included tumbling, cheer, dance and stunts.

“We did everything that we would do in a pep rally in separate intervals in one routine to show what we were able to do and that’s the first time we’ve ever done that as a squad,” Russell said.

The dance team also practiced for about four hours every day for two and half weeks. After earning a runner-up finish on Saturday, dance coach Kristin Vansant said the team knows what to expect next year.

“This is our first competition,” Vansant said. “We thought it was a great experience for them to go through that, and I felt that they did their best. We had four elements: jazz, hip-hop, pom and kick line.”

“They will get rewarded inside themselves for working hard,” Vansant said. “It gives them confidence.”

Russell believes winning the championship is great for the program.

“I just think it puts the merit in the program,” Russell said. “I think what it really means is that hard work pays off. These girls worked really hard on both dance and cheer to achieve this, and I just think we represented our school to the best of our ability. I think we just kicked off the new school year.”