Greenville gets defensive in win 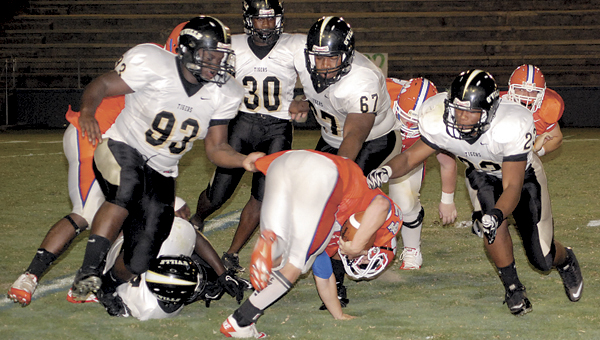 The Greenville defense smothered Chilton County on Friday, holding the host Tigers to two first downs in their first nine possessions and leaving with a 32-7 win.

Greenville, meanwhile, scored on its first three possessions to take a lead CCHS would never threaten.

After an opening kickoff return by Jamall Hamilton that set the visitors up on the Chilton 44-yard line, Greenville scored on 1-yard run up the middle by quarterback Kent Riley.

After the first of many Chilton County three-and-outs, Greenville drove 46 yards and scored on another 1-yard Riley plunge.

Carter couldn’t the get the point-after kick in the air, but he got another chance at the beginning of the second quarter and connected on a 28-yard field goal to give GHS a 16-0 lead.

CCHS had a negative yardage total in the first half and didn’t manage a first down until a 7-yard run by Austin Rossi on third-and-5 from the CCHS 14-yard line with 8:45 remaining in the third quarter.

CCHS didn’t put together a drive until its final possession of the game when senior Dyquan Floyd recorded the game’s last score, a 7-yard run with 57 seconds left in the game.

The visiting Tigers wouldn’t score again until late in the third quarter, when Donta Lee’s 5-yard touchdown run was set up by Michael Smith blocking a Chilton punt attempt.

Greenville’s backup quarterback, Jerome Watkins, made quite an entrance to the game as he ran for a 47-yard score on his first series behind center.