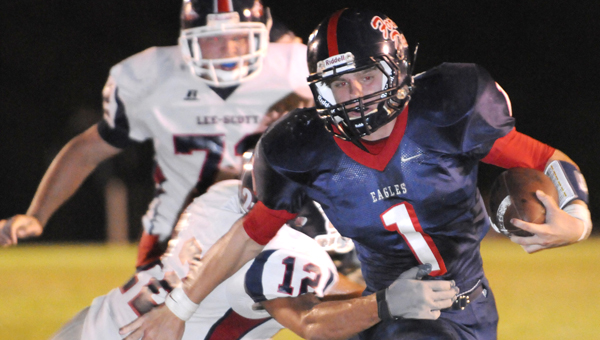 Fort Dale Academy senior Cody Tesmer fights for yardage during the Eagles showdown with Lee-Scott Academy. Tesmer and the Eagles climbed from No. 8 to No. 5 in the latest ASWA poll. (Advocate Staff/Ashley Vansant)

In the game of football, numbers don’t always tell the entire story.

For instance, a 49-38 win could hardly be considered a dominant performance. Unless of course the winning team raced out to a 42-14 halftime lead and played its reserves for most of the contest.

That was the case for Fort Dale Academy Friday night when it scored a 49-38 win on the road against Lyman Ward Military Academy. That performance was good enough to help the Eagles (2-1) climb from a No. 8 ranking to a No. 5 ranking in the latest Alabama Sports Writers Association poll.

Fort Dale will be back in action Friday night when it travels to Hope Hull to square off with Hooper Academy. Kickoff is set for 7 p.m.