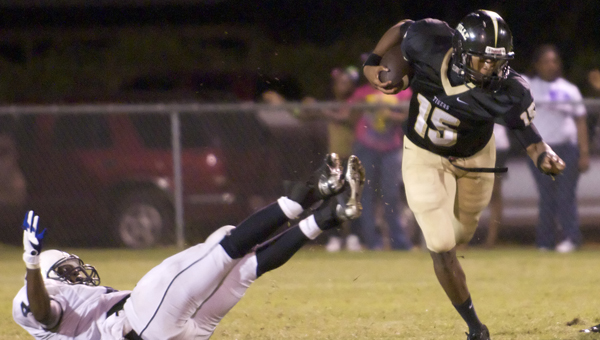 Trailing by one point and needing 1 yard for a first down, the Stampede elected to line up for a field goal attempt. It proved to be the right decision as freshman kicker Adam Shepherd split the uprights on a 26-yard attempt to put his team up by two, but a false start erased the points from the scoreboard and forced Shepherd to attempt a 31-yarder.

The second attempt was blocked and rolled out of bounds at the Greenville 8-yard line.

“That was a (heck) of a job on that field goal block,” Greenville High School head coach Earnest Hill said. “It was an ugly win, but we’ll take it. We did just enough to get by.”

The difference proved to be Greenville quarterback Kent Riley. The 5-foot-11, 175-pound sophomore rushed for four touchdowns, including a 62-yard scamper for the go-ahead score with 5:46 remaining to play.

“I just felt like I needed to step up for my team,” Riley said. “I knew we needed a score, and my offensive line made a hole for me and I ran through it.”

“In the second half, we made some adjustments and came out and did exactly what we needed to do,” Hill said.

Paul Bryant captured a late lead when sophomore running back Dominic Branch barreled into the end zone from 1 yard out to put the Stampede (2-1) ahead 26-21, but was unable to hold the lead.

“Our defense wasn’t great, but we made plays when we had to,” Hill said.

Branch also scored on a 1-yard run in the second quarter for Paul Bryant.

Sophomore quarterback Joe Pradat hit sophomore Tony Whitehead for a pair of scores. The duo connected for scores of 81 and 43 yards.