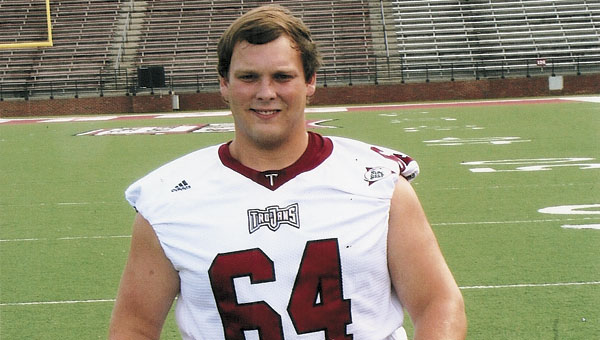 Kendall Gibson has signed his name thousands of times during his academic career.

He’s signed it on tests, class roles and homework. It’s something the Fort Dale graduate did without pause. That is until this summer when he inked his name on a scholarship offer from Troy University.

“They called me and told me they had some paperwork for me to sign, and when I got there it was scholarship offer,” Gibson said. “Signing that paper was a great feeling. I had worked so hard for so long and to be rewarded with a scholarship was amazing.”

For Gibson, an offensive lineman at Troy, the scholarship didn’t come easy.

The former Fort Dale standout walked on at Troy following his high school career and spent the next two seasons on Troy’s scout team facing off with the Trojans’ top defensive players.

“On the scout team, you go against the best every day,” Gibson said. “It’s tough. You get beat down, but it makes you better, and you contribute by getting the defense ready to play.”

Gibson’s effort against Troy’s top players is one of the things that caught head coach Larry Blakeney’s eye.

“He’s one of the most courageous players we have on the team,” the longtime coach said. “He’s a little undersized, but his heart is bigger than most. In his two years here, Kendall has worked hard on the field and in the classroom and he earned his spot on this team. We were happy to be able to reward him with a scholarship.”

In two seasons at Troy, the 6-foot, 280-pound sophomore has seen action in two games.

This season, Gibson, who missed all of spring training following knee surgery, is listed second on Troy’s depth chart and could see action at long snapper, as well as guard and center.

“After missing the spring I thought I’d probably fall down the depth chart, but I had a good fall camp and I’m in a position now where I will have a chance to play and help the team,” Gibson said.

“That’s really my goal for this season. I just want to get on the field and help the team however I can.”

“Kendall is a tremendous young man, and he worked extremely hard to attain his goal of receiving a scholarship to a major university,” he said. “We are very proud of Kendall.”

While at Fort Dale, Gibson was named the Eagles’ Most Valuable Offensive and Defensive Lineman, was named to the Alabama Independent School Association All-Star team and earned all-state honors. He was also chosen to participate in the GE Global Challenge in Kawakaki, Japan.

Gibson and the Trojans will be back in action Sept. 17 when they square off with Arkansas in Fayetteville.