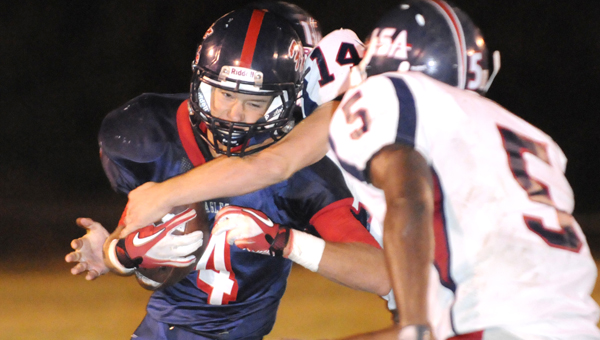 Instead he wanted the Eagles, who entered the contest ranked third in the AISA, to watch the Warriors celebrating on their field.

“This is what happens when you don’t show up ready to play,” Sampley told his team. “Another team dances on your field.”

A week ago, the Eagles trailed 23-19 after Glenwood returned a fumble 80 yards for the go-ahead score with 6:23 to play. Fort Dale responded with a 13-play, 65-yard drive to claim.
Late in the fourth quarter Friday night it looked like the Eagles (1-1) would once again find a way to escape with a come-from-behind win.
With 7:24 remaining in the fourth quarter, Fort Dale defensive back Taylor Windham intercepted a Jeremy Jones pass and raced deep into Lee-Scott territory setting up an easy scoring opportunity, but a block in the back against the Eagles moved the ball back to the Fort Dale 43-yard line.
Fort Dale managed to pick up one first down on its way to the Lee-Scott 38-yard line, but a pair of incomplete passes and a completion that went for a 1-yard loss resulted in a turnover on downs.
“We just didn’t play well at all,” Sampley said. “I’m not taking anything way from Lee-Scott, but we didn’t play up to our ability. We made way too may mistakes and we didn’t make a whole lot of plays.”
Following Fort Dale’s turnover on downs, the Warriors (2-0) rushed the ball on nine consecutive plays to run out the clock.
“They just physically whipped us up front on both sides of the ball,” Sampley said. “That was the main issue. We didn’t block and we didn’t tackle, and there’s no excuse for that.”
In the first half, the two teams traded touchdowns.
Fort Dale struck first scoring on a 1-yard touchdown plunge by running back Perry Singleton, who led the Eagles with 100 yards rushing on 18 carries. Patrick Russell booted the point after attempt through the uprights and Fort Dale led 7-0.
Lee-Scott then answered with 11-play drive that ended in a 1-yard touchdown run by Holt Ingalls. A failed extra point attempt gave Fort Dale a 7-6 lead.

After a 15-yard touchdown run by Fort Dale’s Cody Tesmer with 2:15 to play in the half gave the Eagles a 13-6 lead, Lee-Scott quarterback Jeremy Joseph connected with wide receiver MarQuen Mitchell for 74-yard touchdown pass that knotted the game at 13-all following a successful point after attempt by Jamarcus Walton.

The Eagles claimed the halftime lead when Russell knocked a 28-yard field goal through the uprights as the clock expired to give Fort Dale a 16-3 cushion.

The Warriors went on top for good with 5:04 to play in the third quarter when Joseph, who finished 11-for-19 for 191 yards, hit David Ruffin for an 8-yard touchdown.

Mason Stinson and Singleton each recorded 10 tackles, while Patten Thompson led the defense with 11 stops.

Fort Dale will be back in action Friday when it travels to Camp Hill to take on Lyman Ward. Kickoff is set for 7 p.m.