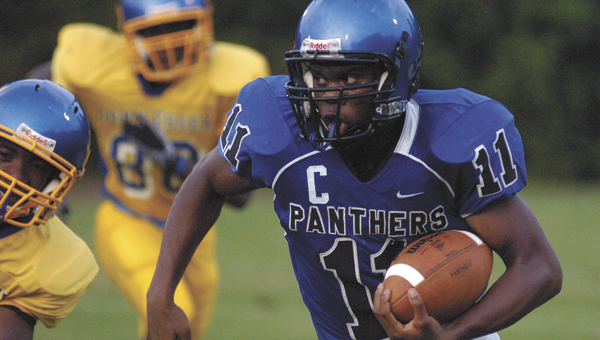 As far as the standings are concerned Georgiana School is still 0-0. But on Thursday night the Panthers kicked off the David Watts era with a 32-18 win against John Essex High School in a preseason contest played at Harmon Field in Georgiana.

“We were a little rough around the edges,” Watts said. “We made a lot of mistakes and just weren’t very good in some areas, but that’s what you play preseason for. We know that we’ve got a lot of work to do, but now we know exactly what it is that we need to work on.”

A major concern for Watts was the Panthers’ inability to consistently stop the run. Essex averaged nearly four yards per carry Thursday night, and two of the three Hornets’ touchdowns came via the ground game.

“We gave up too much in the run game,” Watts said. “Stopping the run has been something we have struggled with the past couple of years and we struggled against Essex. It’s something we’ve put a lot of emphasis on. We talk about stopping the run all the time, but seeing it is different than just hearing us talking about it. I think it was an eye opener for our guys.”

The Panthers run game was equally as good.

The Panthers gained 166 of their 188 total yards on the ground.

The charge was led by senior running back Keon Binion. The Panther standout carried the ball nine times for 70 yards, highlighted by a 24-yard touchdown run as the third quarter winded down.

Senior quarterback Rickey Everett also gave the Hornets’ defense fits. Everett ran seven times for 59 yards, while sitting out the majority of the second half. Everett also scored on runs of 9 yards and 30 yards, while adding a score on a 95-yard punt return.

“Rickey had a good game,” Watts said. “He had his appendix out not too long ago, and he got tweaked a little late in the first half, so we held him out most of the second half, but he did a good job for us while he was in there.”

“He played very well,” Watts said. “I was impressed. When I was in eighth grade I couldn’t have played that well in a junior varsity game, much less a varsity game.”

Payton carried the ball seven times for 18 yards and also completed a pass for 9 yards. He also added a 40-yard scoring run and a two-point conversion.

After falling behind 6-0 after a 71-yard interception return for a touchdown, the Panthers scored 18 unanswered points on a trio of touchdowns by Everett.

Payton and Binion each added touchdowns in the third quarter to seal the Panthers’ win.

“I hope we got the jitters out because we have a tough game coming up,” Watts said. “Luverne is a very good, very physical team.”

The Panthers will host Class 3A Luverne Friday at 7 p.m.