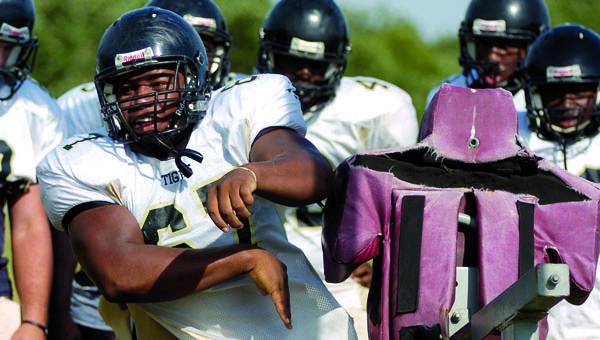 Greenville High School senior defensive lineman Terrance Owens takes part in a pass rushing drill at Monday’s practice. Owens and the Tigers will face one of the state’s top quarterback prospects in Carver High School’s Jeremy Jones when the teams square off in a preseason showdown at Tiger Stadium. Kickoff is set for Friday at 7 p.m. (Advocate Staff/Andy Brown)

Johnson is the kind of quarterback that keeps opposing coaches and defenses up nights.

But having fun trying to defend one of the state’s top prospects is exactly what Greenville High School head coach Earnest Hill wants his defense to do.

And the Tigers will need to be on top of their game if they hope to slow down Johnson, who passed for 2,700 yards and 26 touchdowns as a sophomore – a performance that earned him a scholarship offer from defending national champion Auburn University.

“You don’t shut down a quarterback like Jeremy Johnson,” Hill said. “He’s going to make plays. There’s no question about that, but we need to limit the number of plays he makes.”

While the Wolverines offer a challenge that the Tigers may not see again this season, Hill and the Tigers are less focused on Carver and more focused on using Friday night’s contest to get better.

“We’re worrying about our own team,” Hill said. “This is a chance for us to see what areas we need to improve in before our opener.”

Greenville and Carver will face off Friday at Tiger Stadium.

Panthers looking for different result in 2011

Georgiana School’s 2011 schedule mirrors its schedule from a season ago. While the names on the schedule remain the same,... read more