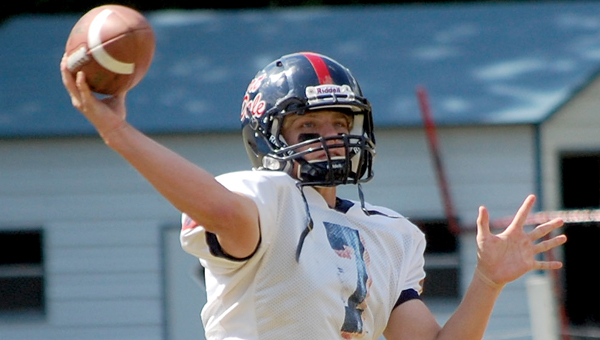 Don’t believe him? Ask him how many games the Eagles won in their first 7-on-7 competition of the summer, which was played at Monroe Academy on Thursday.

“I don’t know what our record was,” Sampley said. “I can tell you that we won more than we lost, but I’m really not sure how many.”

At Thursday’s competition, Monroe employed a modified scoring system awarding points not only for touchdowns and extra-point conversions, but also for things such as interceptions.

“It was kind of hard to keep up with to be honest with you,” Sampley said.

But while the coach might not have kept an eye on the scoreboard, he was certainly paying attention to what was happening on the field.

“I thought we played pretty well,” he said. “We were able to move the ball. Offensively we threw the ball well and for the most part we caught it pretty well. We had a few drops, but overall we were able to do what we wanted to do.”

That’s good news for Sampley and the Eagles who must replace 12 seniors that accounted for 4,700 yards of the Eagles 5,300 yards of total offense last season.

Among those the Eagles are looking to replace is standout quarterback Hunter Armstrong.

According to Sampley, the extra work in the passing game is one of the major benefits of competing in the 7-on-7 camps.

“I don’t care one bit about winning a 7-on-7 camp,” Sampley said. “That stuff isn’t real football, but it does  give us a chance to work on things that will help us win football games in the real world. We can use them to get ready for the season, and that’s why we go to them.”

Fort Dale will travel to Lowndes Academy on Thursday to compete in the Rebels’ 7-on-7 camp.