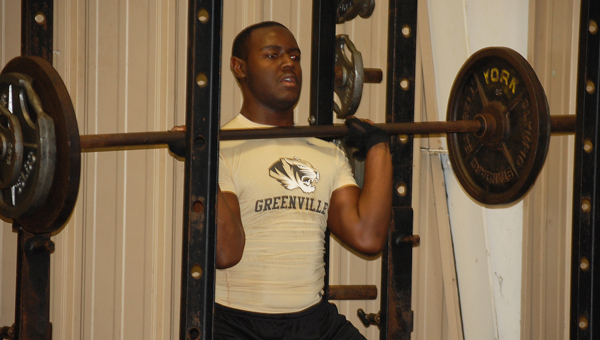 The clock on the wall of Greenville High School’s indoor football facility counts down the seconds until the Tigers’ 2011 season opener with Wetumpka High School.

Not that anyone is paying much attention. The Tigers are too busy lifting weights to watch the seconds tick off the clock, and that’s just the way first-year head coach Earnest Hill likes it.

“You win or lose ballgames in the summertime and the offseason,” he said. “This is a very important time for us to get ready physically and mentally. We’ve got to be working hard right now, and for the most part these guys understand that. This is a great bunch of kids. They’re in here working hard and trying to get ready for the season”

During June, the Tigers gathered three times a week for workouts. Beginning in July, the team will meet four times a week. Along with putting in the time in the weight room, Greenville is also taking part in 7-on-7 camps.

“The biggest thing (about 7-on-7 camps) is that I want to see these guys compete,” Hill said. “I’m not as worried about the wins and losses. As long as they compete I’m satisfied, and I feel like we did that at Northview. We got better. Our offense is starting to come around, and on defense we played OK. We gave up a couple big plays. We had a busted coverage here and a busted coverage there, but the kids played hard and they’re adapting to what we’re trying to do. We’re getting better every day.”

According to Sampley, the summer conditioning program sets the foundation for the season.

“From a conditioning standpoint we get a lot out of it,” he said. “Having them in here working during the summer means that we don’t have to get them in shape once practice starts, and that lets us focus on other things.”

One of the things the Eagles are focusing on this offseason is replacing quarterback Hunter Armstrong.

“We have to find a quarterback, and we’re working on that this summer,” Sampley said. “It’s been a slow process, but we’ll get there. We’re used to having to replace guys. It happens every year, and having the time during the summer to work with guys really helps.”

Like the Tigers, Fort Dale will supplement its workouts by competing in a number of 7-on-7 camps. The Eagles will see their first 7-on-7 action July 7 at Monroe Academy.

Editors Note: Coaches and/or parents are asked to report scores and highlights to the Advocate, either by emailing andy.brown@greenvilleadvocate.com or... read more