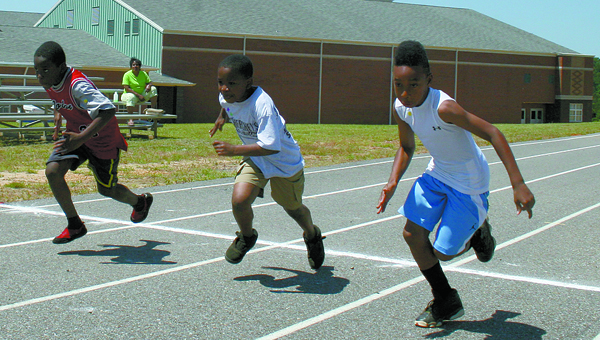 Hundreds of boys and girls are expected to compete in Saturday's state track & field meet, which will be held at the Greenville High School track and will be hosted by the Greenville Parks and Recreation Department. (Photo Courtesy of GPRD)

Hundreds of young people from around the state will compete for a chance to take part in the Hershey Track & Field Games later this summer when the Greenville Parks and Recreation Department hosts the state track & field meet Saturday.

“We are proud to host this event for the second straight year,” Greenville Parks and Recreation Department Director Jerome Harris said. “We had positive reviews for our initial effort last year and look forward to putting on another great meet this time around.”

The event will be held at the Greenville High School track behind the school on Tiger Drive. The meet is open to boys and girls that qualified at Greenville’s local meet and in district meets held throughout the state. The competition is a joint effort with the Alabama Parks and Recreation Association. The scratch meet begins at 9 a.m. with track and field events beginning at approximately 10 a.m.

Hershey’s Track & Field Games has involved millions of boys and girls from all 50 states, the District of Columbia and 10 provinces and territories in Canada. It is solely sponsored by the Hershey Company in Hershey, Penn., and partnered with the National Recreation Association, Athletics Canada and National Association for Sport and Physical Education. The North American meet will be held August 6 in Pennsylvania. State winners do not automatically qualify for the final. Their scores are entered into a regional pool and become eligible for selection to a regional team which will compete in Hershey.