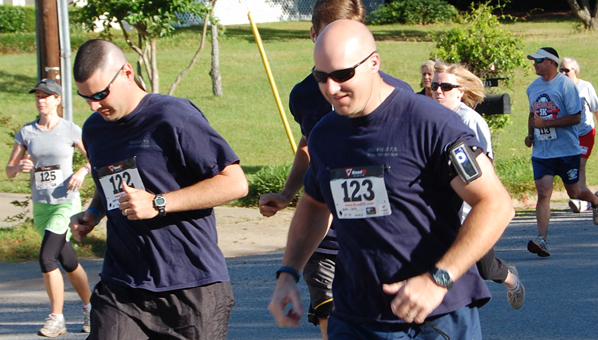 On Saturday, runners from around the area laced up their sneakers to take part in the first ever Fort Dale 5K Diamond Run and Pinch Hitters mile.

The race, which featured 40 runners, raised approximately $2,500, which will be used to help fund the construction of Fort Dale baseball and softball complex.

Josh Banks was the race’s overall winner with a time of 24:52.

“This was our first 5K and I think it went great,” she said. “Our goal was 50 runners and while we didn’t have quite that many we got close. We had several generous local sponsors to help defray expenses.”

According to Thompson, the Fort Dale Athletic Club, which held the event, is planning to make the 5K run an annual event. It will likely be held each year in late April or early May.

Thompson said there are still large and extra large T-shirts with the race logo on them for sale. The T-shirts cost $10 each and the money raised from the sale of the T-shirts will go toward the cost of building the Fort Dale baseball and softball complex. To purchase a T-shirt contact Thompson at (334) 382-2606.