‘Carnival of Hope’ set for Friday 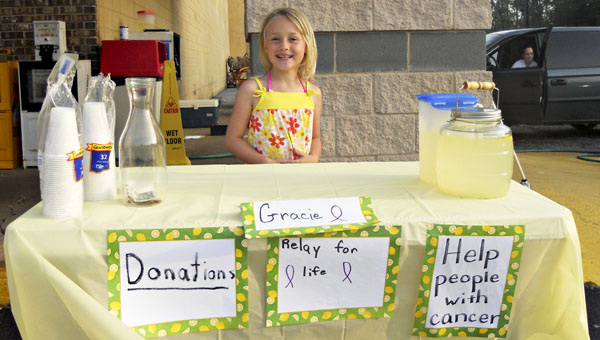 Gracie Brown set up a lemonade stand to help raise money for Relay for Life.

Gracie Brown is excited. Not because of her seventh birthday last week or Easter, but because of Relay for Life, which is scheduled for this Friday night at 6 p.m. at Turner Park in Luverne.

The Highland Home first grader is a member of the Danielville Baptist Church Relay team, and she’s been doing her part to meet the team’s $5,000 goal, which is a part of the county’s goal of nearly $97,000.

Last year, Crenshaw County’s Relay for Life was recognized at the American Cancer Society’s regional conference as the Per Capita Winner for the state of Alabama.

“I get cans and sell lemonade to help people with cancer,” Gracie said.

When the team held a car wash, Gracie set up a lemonade stand next door and raised nearly as much money as the folks scrubbing bumpers.

Gracie is the daughter of Dale and Mitzi Brown, and both of them have been involved in Relay for several years.

“My uncle and aunt have struggled with cancer, and I’ve got several friends that also have had it,” Mitzi said. “One of my biggest inspirations to start working with Relay was Sissy Smyth. She never gave up hope and always had a smile on her face.”

At last year’s Relay, Mitzi got her hair cut for Locks of Love. However, Gracie’s hair was too short to donate.

This year, Gracie will get her chance.

“They’re going to make a wig out of my hair so that people that don’t have hair will have hair like me,” Gracie said.

The Locks of Love ceremony is set for 8 p.m., and it’s one of many events scheduled for Relay.

Opening ceremonies will begin at 6 p.m., and all cancer survivors and their families will be recognized along with the county’s teams and their banners.

This year’s theme for Relay is “Carnival of Hope.”

Throughout the night, various activities will be held, including volleyball, team relay games, a cooking competition and more.

Gracie is looking forward to two in particular: karaoke and the hula hoop competition.

“I’m going to sing ‘I Love Rock and Roll,’” said Gracie, who also admits that she’s been practicing her hula-hooping.

One of the most emotional times of the night is the luminaria ceremony, which will take place at 9 p.m.

At that time, the lights at the park are turned off, the luminarias are lit, and the names of those affected by cancer are read aloud.

Throughout the night, there will also be “theme laps,” such as a patriotic lap, a Hawaiian lap, a Mardi Gras lap and a sports lap.

At 10 p.m., there will be a womanless beauty pageant, and other events will continue until the awards ceremony at 3 a.m.

Teams are competing for awards like Top Fundraising Team, Per Capita, Spirit of Relay and Relay Champions.

Donations will be accepted at the event, and luminarias will also be sold the day of Relay.

Cathy Wilkes contributed to this story.