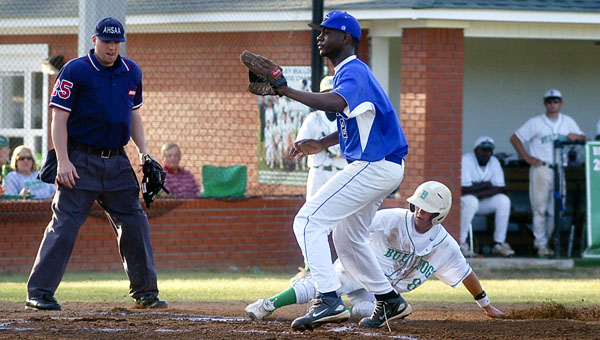 The Brantley Bulldogs ended Georgiana’s season by the score of 12-1 and 21-1 in the first round of the playoffs on Friday.

In the first game, Georgiana’s Keon Binion launched a solo home run for the Panthers, but the Bulldogs were able to end the game after five innings.

The Bulldogs picked up where they left off in the second game, scoring three runs in the first inning, six runs in both the second and third, a run in the fourth and five runs in the top of the fifth inning.

Binion again put Georgiana on the scoreboard with a double to score Devin Bonner in the bottom of the fourth inning.

Despite the disappointing finish, Georgiana head coach Jordan Medeiros said he’s seen a lot of improvement from the beginning of the season.

“We’ve got a lot of young guys, and it’s been a night and day difference from the beginning of the season to now,” he said. “It takes time to build a program, and we’ve got some young guys that will be really good players down the road.”

The win moves Brantley into the second round of the playoffs and on to a showdown with Sweet Water next week.

“I’m proud that we can look beyond the first round and move on to Sweet Water,” said Brantley head coach Ashley Kilcrease. “It’s always a good game when we play.”