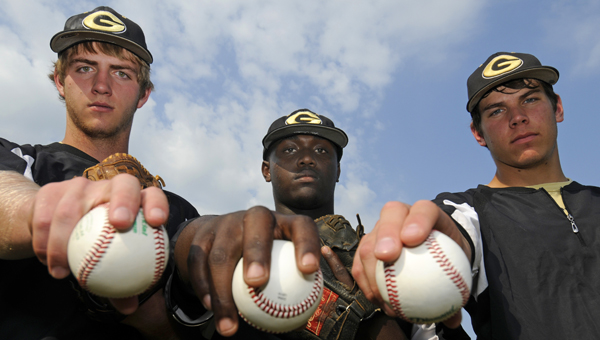 Of Greenville’s nineteen wins this season, sixteen of them have happened with either Rush Nimmer, Ozell Carter or Raymond Moody on the mound.

Baseball is, of course, a team sport, but as the three freely admit, when the team wins, the pitcher is a hero, but when it loses, the pitcher shoulders the lion’s share of the blame.

The Tigers face off against Chilton County this Friday, and the team is feeling optimistic. Moody and Nimmer, seniors, have been before, though the team has only one playoff match.

“I think we have a better chance this year,” Moody said. “It’s going to take defense, no errors and we are going to have to make the routine plays.”

“I don’t think pitching or hitting is going to win this series—both teams are going to be solid on the mound and at the plate,” Horn said.  “It’s going to come down to the team that plays the best defense.”

Of the trio, Moody undeniably has the “heat”, Horn said. Moody’s record is 5-2, with three saves so far.

“Moody’s has a great curveball and a changeup for when he needs it, but when your fastball is consistently in the upper 80s like his, you don’t always have to rely on your other pitches.”

Nimmer leans more towards the finesse, Horn said, touting four pitches in his rotation. Nimmer is 7-0 for the season.

“He has really hit his spots this year,” Horn said. “He doesn’t try to overthrow it and he relied more on his defense help him out.”

Those who have seen Nimmer pitch may have noticed the seriousness on the senior’s face once he steps on the mound.

“I don’t want to put the thought in the batter’s head that this pitcher isn’t serious,” Nimmer said. “I want the batter to think ‘this guy is fixing to throw one in here—he might even hit me.”

Carter is by far the least experienced of the three, but he is only a sophomore, and is relatively new to the game, Horn said. Carter has only played baseball for three seasons, and he has pitched for only two of those. In addition to putting up 4 wins of his own, with one save and four losses, Carter helps Nimmer and Moody by giving their arms a break.

“He has really stepped up this year, and I expect big things to come,” Horn said.

Game one in the three game series versus Chilton County will get underway at 4:30 p.m. Friday, with the second match to follow 30 or so minutes after the first. If necessary, the game will push to the third match, which is scheduled for 1 p.m Saturday.