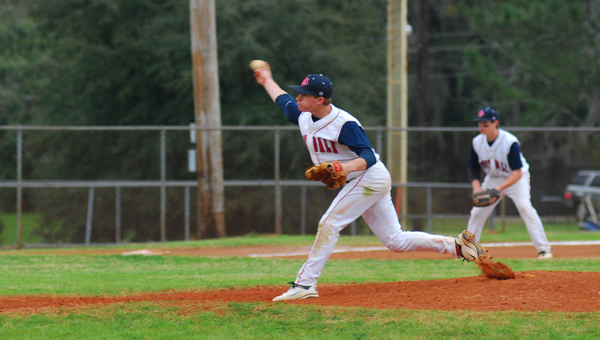 Skylar McKeown (above) has been Fort Dale’s stand-out pitcher this year. McKeown held Lee-Scott to one run Tuesday before he had to be removed due to an aching arm. The Eagles lost the match after Lee-Scott jumped on Fort Dale’s relief pitcher, scoring 7 runs in the fifth inning. (Advocate Photo/Austin Nelson)

Following an 11-10 victory over Gwinnett Christian last Friday, the Fort Dale Eagles have a string of tough losses starting with a 13-0 loss to Autauga Academy last Saturday.
Things went from bad to worse, with Fort Dale falling to Edgewood Academy 16-1 Monday and then topping it off with an 8-1 region loss to Lee-Scott on Tuesday.
The Eagles are now 0-5 in their region.
“Our offense is very anemic to say the least,” said coach Josh Beverly. “In high school baseball, if you strikeout as much as we have lately, never putting the ball in play, you aren’t going to win a lot of games.”
Beverly said their main objective now is finding a way to put some more runs on the board.
Autauga Academy started slow against the Eagles, scoring no runs until the third.
Without many hits to speak of, however, the Eagles slipped behind. Brandon Matthews and Stephen Till were the only Eagles to make contact, each batting 1 for 3.
Late in the sixth, the levy broke, and Autauga went on a 10-run rally that was the nail in the coffin.
The Edgewood game was almost the complete opposite scenario, with the Wildcats jumping on the Eagles from the very first crack of the bat, scoring 12 innings in the top of the first.
Eli Blackmon went 1 for 2, with no more Eagles making contact.
“We didn’t play terrible, but they hit the ball and we didn’t,” Beverly said. “The pitching was okay, we just had to utilize some of our inexperienced players on the mound.”
In Tuesday’s region bout with Lee-Scott, the Eagles touted a few more hits than the Edgewood game, but not much more.
Jonathon Scott and Brandon Matthews each had two hits, and the game was tied until the fifth inning, 1-1.
“Skylar McKeown pitched a good game, but his arm was starting to bother him, and we had to take him out in the fifth,” Beverly said.
The relief pitching was lackluster, and Lee-Scott ran away with the game, scoring seven runs in the fifth, Beverly said.
“We’ve been competitive in every region game except for Pike, but we just got a long way to go,” Beverly said.