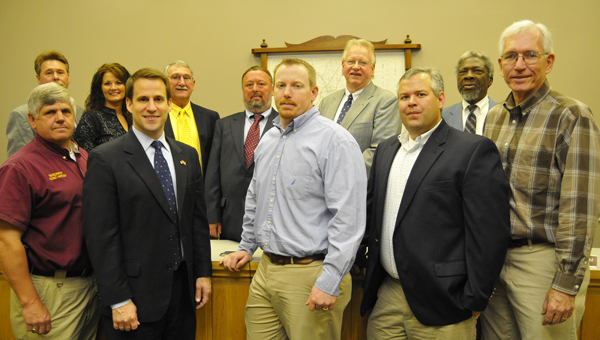 Coastal Forest Products announced plans to invest up to $6 million in its Chapman facility today.

Company CFO Travis Bryant said the bulk of that money will be spent at the facility’s plywood plant, modernizing equipment there in order to help the company remain competitive on the open market.

The announcement was made during Monday’s meeting of the Butler County Commission.

“The Chapman plant is the heart and soul of this community,” said Commission Chairman Jesse McWilliams. “We stand committed to helping Coastal Forest remain successful in this county.”

In a released statement, the company said the modernization will “increase production and lower operating costs” and is “expected to have a dramatic impact on the company’s cost structure and competitiveness.”

“We appreciate the continued support that the Butler County Commissioners, the State of Alabama, and the people of Butler County have shown for our company and our efforts at the Chapman facility,” said Kevin Luzak, President and CEO. “While we continue to face a difficult economic climate, CFRC is committed to investing in this facility and ensuring that Forest Products Manufacturing will remain an integral part of the economic landscape in Butler County.”

Coastal Forest Products, a subsidiary of Coastal Forest Resources Company, acquired the Chapman plant in 2009 and started operations in January 2010. The company initially started with a workforce of 256 employees, but now employs 310.