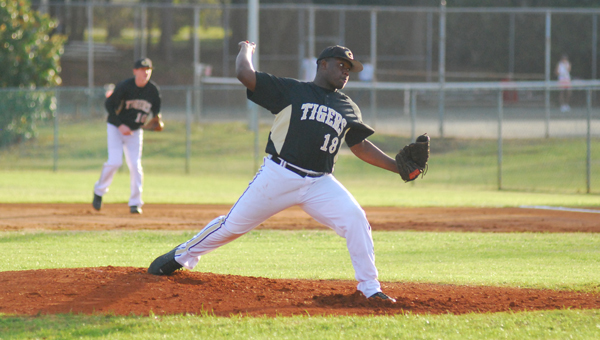 Ozell Carter picked up the win for the first match, pitching 6 innings and giving up one earned run. The victory on Monday was ecspcially poignant for the Tigers afterlosing two previous matches to Andalusia earlier in the season. (Advocate Staff/Austin Nelson)

The Greenville Tigers defeated Andalusia twice last night in a double-header match up, winning 11-4 and then 6-2 to bring their season record to 6-3.

“The first inning we gave up 3 runs off a couple of errors, and it started to look like who is going to play worse,” Horn said.

The second inning, however, turned things around when returning senior Raymond Moody stepped up to the plate, belting a grand slam to grab the lead back.

“It was clear it was gone,” Horn said.

“That gave us some momentum,” Horn said. “After that, there weren’t any errors in the field. That momentum carried all of the way into the second game.”

Carter had the mound for the majority of the first game, pitching six innings and giving up one earned run and four hits. Jerome Cook came in to close out the game, only conceding one run and one hit.

Moody led the offense with 4 RBIs and 2 hits.

Moody took the mound for the second game, and proved too hot for the Andalusia batters to handle. Moody, whose fastball has been clocked at 92 MPH, struck out 11, and gave up only one earned run, walking no batters.

The Tigers picked up 2 runs early, but Horn said the offense felt a little complacent with Moody on the mound.

“We need to give him a little more run support,” Horn said.

After some aggressive base running, however, the Tigers were able to score 3 runs off one throwing error to give Moody a little room for error.

Horn said season has gone well so far, though there were some early hiccups in the infield.

“Even though we have 7 seniors, we are really young,” Horn said. “We had to replace our catcher, shortstop, second baseman and first baseman-almost the entire infield.”

During a previous double-header with Andalusia on Feb. 25, the Tigers had the opposite outcome, losing 12-6 and 6-5. Horn said errors were rife in these early match ups.

Horn believes his Tigers turned the corner against Monroe County. The team struggled through the first game, hitting the ball well, but lacking defensively. Still, they held onto the win 11-8.

“The second game, our players just had a different attitude,” Horn said. “They were more focused, and only gave up one run.”

The 14-1 victory served as a confidence booster that Horn said his players needed.

“The more play these guys see, the better off we will be,” Horn said.