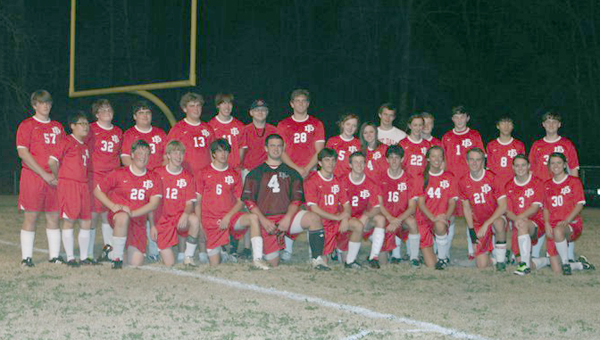 Fort Dale Academy's second year soccer team is pictured after the grand opening game against Prattville Christian Academy. FDA won the game Tuesday night against PCA. The team proudly announces it has thirty players this year. Soccer has not only grown in popularity in the United States but also here in Greenville. The soccer coach is Mr. Bert Rice. (Submitted Photo)

The Fort Dale soccer team opened the season in good fashion with a 2 – 0 win over Prattville Christian Academy in Greenville Tuesday.  The Eagles are in their second year of fielding a team as interest in soccer continues to grow in the AISA.  They are led by first year Coach Bert Rice.

“This is a new experience for me” said Coach Rice.  “I never played soccer, and this is my first year coaching it. While we do have some key players returning from last year’s team, over half of the players on this team have not played since rec league as far as I know. So we’ve all been learning on the run.”

Fort Dale’s first goal came in the first half when Tyler Millo scored off a pass from Brandon Brown to give the Eagles the lead.  With 14 minutes remaining in the second half, Brown made a long pinpoint pass from the corner to Millo who scored again on a header to secure the win.  Great defensive pressure by the Eagles allowed on a few shots on goal by Prattville Christian and those were stopped by goalie Chance Williams.

“I thought the game was fun to watch” said Rice.  “The crowd was great, and I really appreciate everyone coming out and supporting the team. The fans excited the players, and in turn, we played with a lot of pride. I could not ask for a better effort.”

“The team won one game last year, and at this point, that’s all we have won. This team has the opportunity to be pretty good if we improve at every opportunity. In any team sport, you have to stay focused. Tuesday night was exciting, but it’s time to get ready for the next one.”

The Eagles will play a 12 game regular season schedule this year.