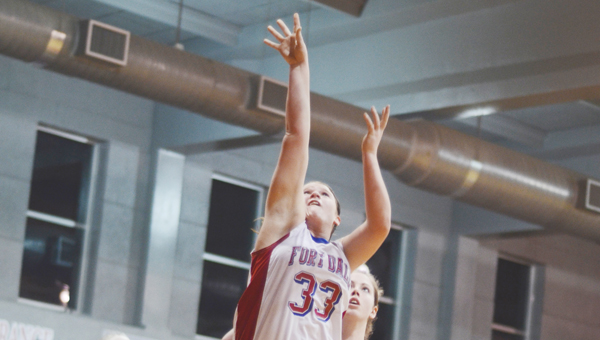 Murphy MIddleton goes up for a shot against East Memorial, while teammates Katie Wilson and Jessie Langford look on. (Advocate Staff/Austin Nelson).

The Fort Dale Girls season came to an end Friday with a 34 – 29 loss to East Memorial Christian Academy in the quarterfinals of the state tournament at Huntingdon College. The Lady Eagles led 18 – 15 at halftime and expanded that lead to 22 – 15 with 5 minutes to go in the 3rd period. But they would hit a slump and not score for the next 10 minutes and East Memorial was able to take the lead. Sarah James hit a 3 with 1:35 left in the game to pull Fort Dale within one at 30 – 29 but they did not score again and East Memorial held on for the win.

The Lady Eagles only shot 20% from the field while East Memorial was able to shoot 39%. Fort Dale’s defense forced 22 turnovers and that kept them in the game. Both teams shot poorly from the free throw line with Fort Dale hitting 2 of 5 and East Memorial hitting 8 of 23.

Despite defeating Prattville Christian in the semifinals last year, the Fort Dale Eagles couldn’t find the strength to muster another defeat.

The defeat brings Fort Dale’s season to an end. The boys posted a 6-14 record for the season. –Austin Nelson contributed to this report