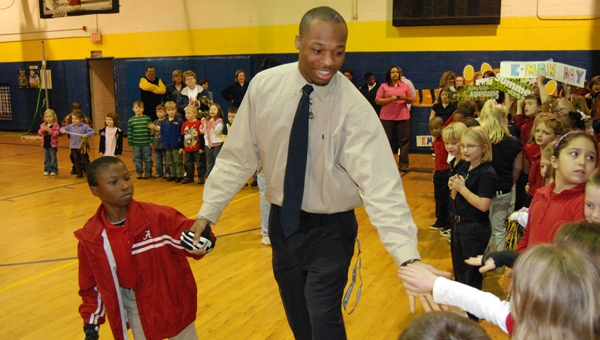 After the signing ceremony was over, E-Man (Emmanuel Johnson) made the rounds around the gymnasium giving out high-fives to his younger fans.

As McKenzie Senior Emannuel Johnson walked into the gymnasium Wednesday, it was clear that the crowd had gathered for him.

A spirit line of younger children formed a hallway that he entered through, while the children waved homemade signs and chanted in solidarity “E-man, E-man, E-man.”

For Johnson, the day was the culmination of all he had worked for all these years, as his academic and athletic achievements earned him a scholarship to Southern Mississippi University.

Coach Miles Brown stepped to the podium to introduce Johnson.

“When these schools come around, the first thing they ask for is not a highlight film, its what kind of grades does this athlete make,” Brown said. “If you don’t make the grades, they won’t make the investment in you.”

Brown added that Johnson’s disciplinary record was a blank sheet of paper, which helped make him more attractive to recruiters.

Johnson said the decision on which college to play for was an easy one, one that started three years ago.

“Southern Miss was my first offer-It came at the end of my ninth grade year,” Johnson said. “I looked at other schools, but I like the way Southern Miss does things. They are like a family.”

Johnson will, of course, have to leave his home of McKenzie, but the senior says he is ready to take the next step.

“I am going to get my degree in business administration,” Johnson said.

He will be only the second one from his family to attend college, and pending his sister’s graduating, he stands to be the second to ever finish at a four-year institution.

Johnson gave credit to coach Brown for helping shape him during school.

“Coach Brown came here in eight grade he has made a big difference in my life,” Johnson said. “Ever since I have been playing, he has been my coach and mentor.”