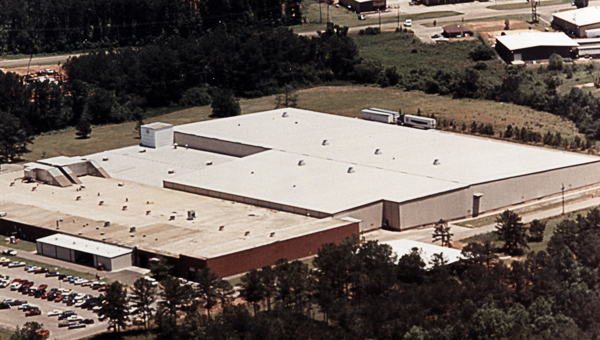 WestPoint Home announced plans on Monday to close its 300,000 square-foot facility in Greenville. The closure will put 120 full-time employees out of work. (Courtesy, BCCED)

WestPoint Home will close its manufacturing plant in Greenville, the company told employees on Monday. Plant operations will be moved to Chipley, Fla.

“WestPoint has a quality workforce,” he said. “It’s very diversified with machine operators, welders, electricians and more, and they had employee turnover of less than two percent. I believe their average employee has been there 10 years and they had a great safety rating.”

McLaney said his office is working with the Alabama Career Center to coordinate a future meeting with WestPoint employees where state and local resources can be made available to them. He’s also compiling a fact sheet about the company’s personnel to aid potential employees.

Law requires a 60-day notice be given in the event of a plant closure, said McLaney.

“They’ll be in operation for 60 days, but from what I was told the bulk of the employees will have a job until this summer,” said McLaney.

Job news had been good for Greenville, up until Monday’s announcement, with both automotive suppliers scheduled to add employees in the coming months. Both Hwashin America Co. and Hysco America Co. will add 140 jobs between them by September. Hyundai Heavy Industries, in Hope Hull, is bringing 1,000 jobs in early 2012.

“It takes months and months of work to get these jobs and, in the blink of an eye, with one phone call, the jobs can go away,” said Mayor Dexter McLendon. “But that’s the society we live in. It’s tough times. We’re very fortunate we have jobs coming and we’re going to do everything in our power to help find these employees at WestPoint work.”

Calls to WestPoint Home in Greenville were not returned.

WestPoint Home has operated in Greenville since 1999 on Glendale Ave., formerly home to Rheem Manufacturing. The company once employed 242 people, according to data provided by the Butler County Commission for Economic Development, leasing an additional manufacturing facility in the city’s Industrial Parkway in 2001.

The Chipley plant was also scheduled for closure, but WestPoint Home reversed that decision in November of last year. The company closed two textile plants in Biddeford, Maine, and Elkin, N.C., in April 2009.

The textile industry, once the lifeblood of small southern towns like Greenville, has gradually declined in the United States the last 15 years.

And it’s not likely to see any job growth in the future, according to the Bureau of Labor Statistics. The industry is expected to lose 181,700 jobs between 2008-18.

44 textile plants closed between 1997-2009 in Alabama, according to the National Council of Textile Organizations.