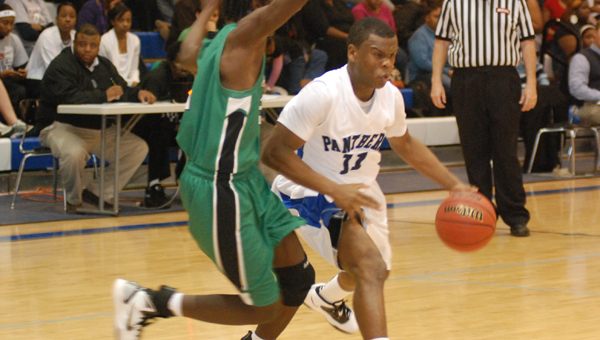 Keon Binion charges past Brantley defenders in Friday's matchup. Georgiana is now the No. 2 seed going into the area tournament next week (Advocate Staff/Austin Nelson).

The Georgiana Panthers are now the #2 seed in 1A Area 3 after a win over Brantley Friday.

The Panther’s kept Brantley’s offense, who had scored 85 points in the preceding match, to only 29 points, letting Georgiana walk out with the win, 47 -29.

“Our guys really put it out there,” said coach Kirk Norris. “We knew we had to have a good defensive game. Brantley has always been known as a team that can really shoot the ball.”

The game started well for Georgiana, but Brantley stayed on its tail. With two minutes remaining in the first, it was still a close game, Panthers 9 – Bulldogs 6.

Georgiana, however, continued to pull away from Brantley. With 5 minutes remaining in the first half, the Panther’s were up 17-10.

Norris said his offense was making good passes, but still had room for improvement.

“We need to do a better job of getting offensive rebounds, especially going into the area tournament,” Norris said.
The Bulldogs fared no better offensively the second half. Though Brantley was able to grab a few more points, their final score was only a fraction of what the traditionally high-scoring team was accustomed to, leaving them short 47-29.

From here, Georgiana will advance to the area tournament, where it will face #3 seed Brantley once again. Girls will kick off at 5:30 p.m., with boys to follow at 7 p.m. starting next Thursday.

Adrian Rich added 11 to the Panther’s score sheet, making him the lead scorer for the night. Adrian Paige and Keon Binion each tallied in at 10 points apiece.