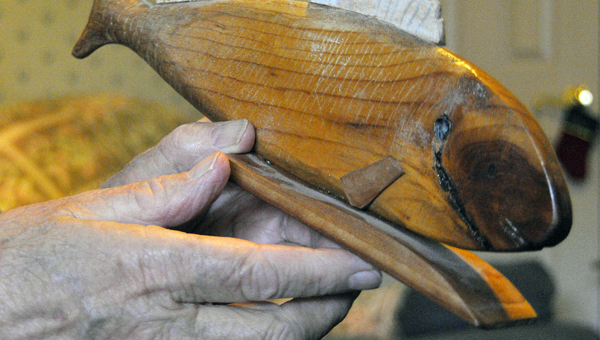 HAPPY FISH: Faust holds a carved fish he made after noticing the “smile” and “eye” in the wood. (Advocate Staff, Kevin Pearcey)

Thurl Faust is not familiar with the Germanic legend of his namesake, the story of a man who sold his soul to the Devil for worldly goods and women. But he does remember what his daddy told someone confused with its pronunciation.

“‘Mister FOW-st,’ they said,” recalls the son. “My daddy said ‘I’ve got some kinfolks that went up north that call themselves FOW-st, but I’m still FAW-st!’”

The 83-year-old Faust lives in a room at Homewood Assisted Living. A simple poem thanking his mother – for little things like colored Easter eggs and Christmas mornings – is tagged to one wall. A photograph of his father, the young soldier ready for war, hangs over his pillow.

“World War I,” says Faust. “He was on the way over in a boat and the war ended.”

He slips a leather wallet from his pocket and pulls out a small black and white photograph. A woman in a bathing suit and bathing cap, circa. 1950. His late wife, Sarah Margaret. He met her in southern Illinois while working at the Caterpillar Tractor Company.

“She was a good cook, but she cooked Yankee-type food,” Faust said. “Biscuits tough as nails. English peas. I don’t think she knew what black-eyed-peas were.”

While visiting his parents in Alabama, Faust says Sarah Margaret cornered his mother in the kitchen.

“She told my mother, ‘I want you to teach me to cook like you do,’” said Faust. “She wanted to satisfy me.”

He was born in a little log home near Spring Hill Baptist Church, a house that’s still standing, says Faust. There’s a painting of his homestead on his dresser. Faust built the frame for it. He’s earned a reputation as a “whittler” at Homewood, but it’s a skill he’s carried nearly his entire life.

“Santa Claus brought me my first knife when I was six or seven,” he said. “I’ve been whittling things ever since.”

Faust has several canes in his room, some he’s whittled, and others he’s been given. Despite two back surgeries, he walks everyday except Sunday. While outside, he whittles.

He says he’s whittled at least 50 roosters during his three years at Homewood. Most of those he’s given away.

One rooster he keeps and treasures because it was Sarah Margaret’s favorite.

“I wouldn’t take no amount of money for it,” he says.

An arching line and dot in one piece of wood looked like an eye and smile, so Faust made it into a fish, adding scales and gills and his initials stamped to the bottom.

He carved a statue of Mary and the baby Jesus that sits atop the television in Homewood’s recreation room, enclosed in glass.

While working on that, Faust says a song came to him about Jesus and the cross and redemption through His blood.

He sings it often, closing his door so as not to disturb his neighbors. 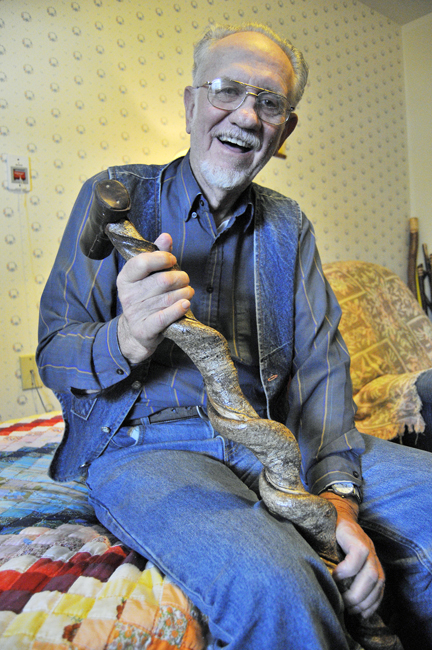 Homewood resident Thurl Faust shows off the “walking stick” he made out of a long tree limb with vine entwined around it. (Advocate Staff, Kevin Pearcey)