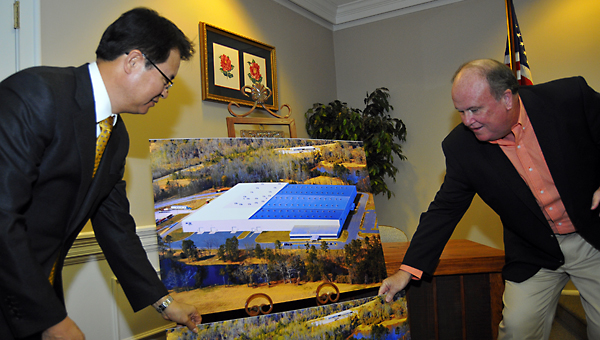 Hysco America Co. is adding 40 new jobs to its workforce and expanding its facility in Greenville, the company said on Monday.

The 174,000 square-foot expansion represents a $22 million investment and construction is scheduled for completion in September.

“Hysco America is pleased to have this opportunity to make this announcement in light of the recent economic conditions,” the company stated in press release. “We are extremely proud of the success of our parent company, Hyundai Motor Group. We are pleased to be part of a company making great automobiles and it is showing in the public’s increasing confidence in the products we are making. We are all optimistic and excited about the future of our business and the direction of our company.”

The announcement was made at the Greenville City Council meeting Monday night. An artist’s rendition of the plant, following finished construction, was unveiled by company President Y.H. Shin and Mayor Dexter McLendon.

“Hysco is such a strong company and an important part of our community,” said McLendon.

“That’s saying something,” said McLendon. “Not many places can say they’re adding 1,140 jobs to an area especially considering how the economy has been. And I think this is just the beginning.”

“When your existing businesses are expanding, they’re going to give good reports to those businesses looking to locate in Greenville,” said David Hutchison with the Alabama Development Office.

Screening and selection of new employees is scheduled to start in April. The selection process will be made through the Alabama Career Centers and Alabama Industrial Development Training.