Things became a little heated during Thursday night’s regular meeting of the Butler County Board of Education when a highly touted but controversial non-profit program called “Teach For America” was introduced to the board and audience to be considered as an addition to the Butler County School District in 2011-2012.

TFA, based in New York City, is a national corps of college graduates of all academic majors and career interests who commit to serving two years as teachers in either inner city or rural schools where there is a high poverty level.

Founded by a Princeton University graduate in 1990, the organization’s motto is “One day, all children in this nation will have the opportunity to obtain an excellent education.”

J.W. Carpenter of TFA shared in a PowerPoint presentation details about the organization. Carpenter stated TFA’s goal is to place some of the best and brightest recent graduates in school systems where they can work within the educational system and further develop leadership skills to make “fundamental changes needed to ensure that all children have an equal chance in life.”

A large number of Ivy League and private colleges and universities have students applying to be a part of TFA, which accepts only a small fraction of its many applicants into the program-4,500 spots out of 48,000 applicants this year. Corps members may already have teaching credentials when they apply, but they are not required to have them. An intense five-week training course is required during the summer before they enter the classrooms. An Alternative Certificate is issued and they become eligible for full certification after three years.

If the Butler County School District chooses to commit to being part of TFA-Alabama, the district will hire five of their corps members, paying them a standard beginning teacher’s salary and benefits. In addition, the district would pay TFA $3,000 annually for each corps members for the first year and double that amount for the second year. According to Carpenter, the additional monies go to professional development.

“Over 60 percent of our corps members end up staying in education, either in the classroom or some supervisory role, and the rest stay committed to supporting education in their communities,” Carpenter said.

The program is currently in place in neighboring Lowndes County. California native and U of A graduate Alex Flachsbart, an economics major, is a TFA corps member currently teaching math at Central High School, where he was named Teacher of the Quarter in Lowndes County. The young teacher shared his reasons for becoming part of TFA.

“I decided I wanted to follow in the footsteps of my grandfather, who was a teacher, largely in one-room schoolhouses. He started his career in 1929, not a great year for our country, and was literally paid in meat and potatoes,” Flachsbart said.

“I feel as if I have made significant gains in the first semester of teaching. I am up late every night working on those lesson plans, trying to incorporate questions from the ACT exam and grad exams into their lessons . . . I’ve also started a pep squad at Central High and you’ll find me doing tutoring late a night at Subway,” Flachsbart said.

“I love my school and I hope the joy I have taken from these students is somehow channeled back to them.”

Concerns about the program being implemented in the county were expressed by Julie Swann, AEA-UniServe representative for the area and WS Godwin, veteran classroom teacher in Butler County.

Swann cited a Washington Post article that she said stated the overall long-term gains shown by TFA were minimal.

“Also, the board certainly knows we are facing another year of proration; we will be losing teacher units in Butler County. I believe we also have less than one month’s reserve on hand,” Swann said.

“And we are considering $15,000 in addition to their teachers’ salaries?”

Godwin said he preferred to see the board spend money on helping existing teachers in the system with professional development expenses.

“Help those who have proven they care about our children for the long term, not just for a two-year span,” he said.

Godwin also expressed concern the TFA-supplied teachers would not be properly prepared for the classroom.

“We are required to be highly qualified in our areas-and yet they don’t necessarily hold the same certificate we hold,” Godwin said.

Superintendent Darren Douthitt, who was introduced to the concept of TFA in a recent superintendents’ meeting, said he didn’t want anyone to “lose any sleep” over the idea of the program coming to Butler County.

“This is simply an opportunity to look into, and we are not making a decision about it right away,” Douthitt said.

Carpenter said TFA would need to know by next month’s meeting if Butler County wants to come on board with the program.

The next regular board meeting will be on a different day and date than usual: Tuesday, February 22 at 6 p.m. in the Central Office Boardroom. 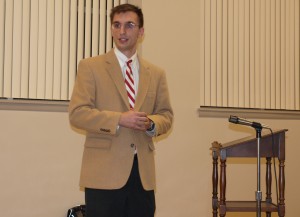