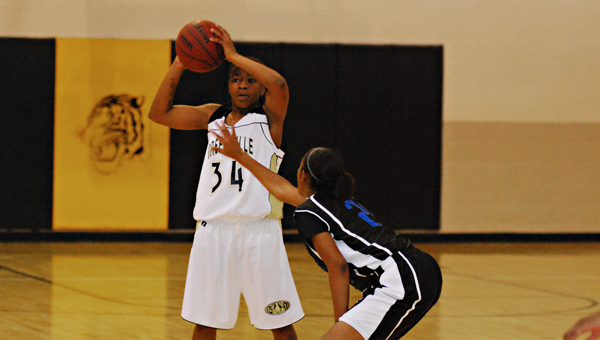 Lakeidra Savage, #34, was one of two leading scorers who picked up 12 points during Friday's match. Jasmine Morris also scored 12.

Carlyshia Robinson single-handedly outscored Wilcox-Central during the first quarter, putting up 7 points to the Jaguar’s 6. Greenville’s Lakeidra Savage added 6 to the board, with Jasmine Morris and Jasmine Stewart each adding a basket to give the Tigers a 20-6 lead going into the second quarter.

Wilcox-Central managed to put some more points on the board, but again got outscored by the Lady Tigers in the second. Six Greenville players claimed at least one basket during the second quarter to keep the lead going into half, 39-19.

The third quarter was another chance for the Tigers to increase their lead. Kadeisha Cook grabbed 5 points, while Morris, Stewart and Savage each picked up 4 points in the third to add another 17 to the Tiger tally.

Both teams produced very little offensively in the fourth, with Greenville adding 8 and Wilcox-Central putting up 5 points to seal the Jaguar’s fate.

Coach Jerome Harris was pleased with the girls’ efforts.

“They went out there and did what we coached them to do,” Harris said. “The moral of the story is that they played harder than the other team. They wanted it more.”

Savage and Morris were the leading scorers for the Tigers with 12 points each.