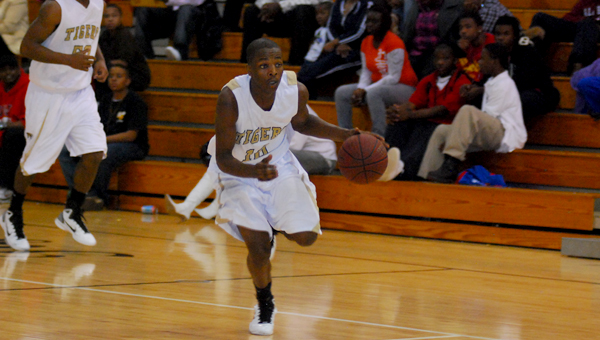 Rashad Cannon on a fast break during Friday's game. Cannon totaled 30 points for the game.

Despite coming back from behind to tie the game 44-44 in the third, the Greenville Tigers couldn’t fend off the Wilcox-Central Jaguars, losing 84-72.

The Jaguars came out early, putting up 25 total points in the first quarter. The Tigers made the most of all given opportunities, scoring on 4 out of 5 free throws, but the Jaguars commanded their shooting outside the lane, picking up a total of three three-point shots to tip the first quarter score in Wilcox-Central’s favor, 25-14.

The Tiger defense stepped up to keep the Jaguars to 15 in the second. Daryl Starks contributed 6 points and Za’darius Smith and Rashad Cannon netted 4 points each to outscore the Jaguars and cut into their lead. At half, the Tigers were down by seven, 40-33.

The Tigers came out strong in the third, catching Wilcox-Central, who had led the entire game, on their heels. Greenville outscored the Jaguars 23-21 during the third quarter, which allowed the Tigers to tie the game briefly at 44-44 before handing the lead back.

The Tigers did not fare well in the fourth. The team that had just mustered a comeback, sputtered, as if lacking the energy or desire to finish the effort. Wilcox took the lead back, keeping it until the end, 84-72.

“We have to want to win,” Harris said. “We need to play that fourth quarter if we are going to come together and get better.”

Cannon was by far the Tiger’s best shooter for the night, racking up a staggering 30 points, followed by Starks with 10.