Back when the Fort Dale Eagles engaged in gridiron contests as the Fort Dale-South Butler Academy Eagles, the good folks on Gamble Street witnessed a thriller one fall evening in September.

Fort Dale-South Butler entered the game with a 4-2 record and was playing host, not only to Catherine Academy, but a host of “old grads” for homecoming.

The rest of the game was played in a virtual downpour as heavy rain pelted both squads and slowed both offenses considerably.

The Eagles drove to inside the Catherine 20-yard line, but was turned away on downs after Josh Middleton was stopped short of a first. The Colts again denied the Eagles later in the fourth, stopping Middleton on fourth and four inside the 11-yard line.

Finally, the Eagles got the break they needed. Catherine shanked a punt and FDSBA took over at the Colts’ 31-yard line.

But still it came down to a final play. On fourth and 10, Brian Sexton connected with Rand Timbie for a 20-yard touchdown pass with under two minutes to play and the Eagles hung on for a 13-7 victory. 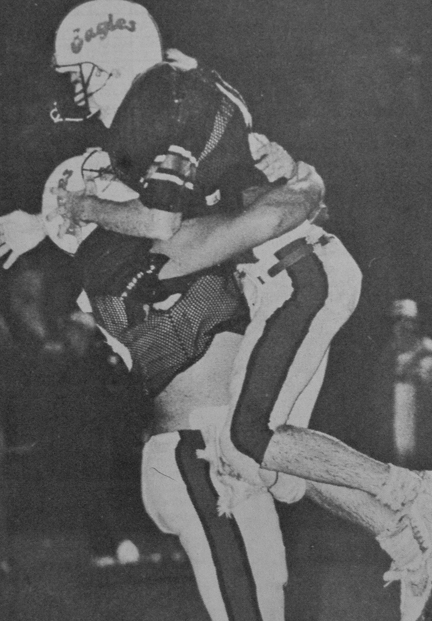 Timbie leapt for joy after catching the game winner versus Catherine with time winding down.