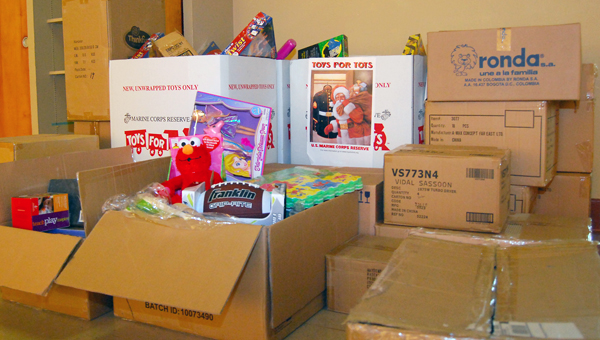 Toys, for the Toys for Tots charity program, line the wall of a room in the Greenville Police Department on Wednesday. (Advocate Staff, Kevin Pearcey)

A report that more than 1,000 toys intended for underprivileged children through the Marine Corps’ Toys for Tots program were stolen is false, according to the Greenville Police Department.

The toys for the program are stored on-site at the police department and no report has been filed for the theft, said Greenville Police Chief Lonzo Ingram.

There is also no sign of forced entry into the building, said Ingram. Ingram said the police allowed Toys for Tots to store the toys in the room, but were not in charge of distributing the toys. The room served as the central office boardroom when the Board of Education owned the building.

There were boxes of toys and games – some unopened – still inside the building on Wednesday morning. All doors locked securely and no windows were broken.

Ingram said there were less toys than had been stored there, because a number of people had been by to pick up toys.

Lt. Justin Lovvorn said he’d seen several different individuals pick up toys over the last few weeks. He said someone would typically check in at the front desk, say they were there to get toys for Toys for Tots, and be shown to the storage area.

“We had no way of knowing who they were or if they were authorized to get the toys,” said Lovvorn. “It’s likely there could have been some misappropriation of some toys because, obviously, a person or organization is likely to get the best toys available, when it might have been intended for someone else.”

Dr. Debbie Davis, who serves as coordinator of a nine-county area that includes Butler, told The Advocate on Tuesday night that the toys were stolen.

Ingram said Davis was offered the opportunity by Capt. Anthony Barganier to file a police report, but refused. A police report was filed by the organization at 2 p.m. Wednesday for burglary, according to police.

The Advocate was unable to reach Davis by phone on Wednesday morning and unable to leave a message because the voice mailbox was full.

The Advocate will update this story as more news develops.