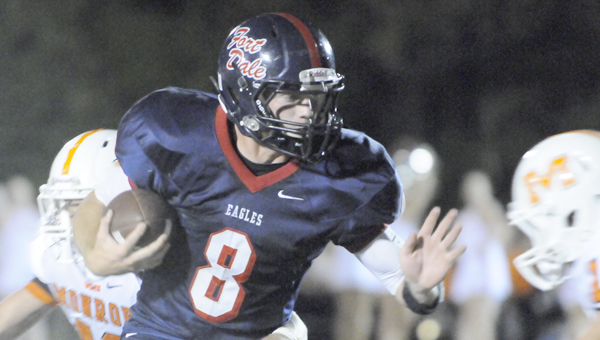 Hunter Armstrong was a finalist for AISA Back of the Year, but not the winner. We wonder why.

Admittedly, this column is coming from the perspective of a person who works at a paper of a city that’s home to the defending state champion Fort Dale Academy Eagles. But I just have to ask this: how is Hunter Armstrong not Back of the Year in the AISA?

The Alabama Sports Writers Association released its annual pairings of both the best backs and linemen of the 2010 season on Saturday. Mark Lear of Clarke Prep was named the AISA’s top back. Armstrong and Edgewood quarterback Matt Moore were Lear’s fellow finalists.

Now, please. Understand. This takes nothing away from Mark Lear’s accomplishments as a running back at Clarke Prep. He rushed for over 2,000 yards as a senior and led a powerful rushing attack as the Gators finished the year 10-2 following a close 43-40 defeat at the hands of Edgewood in the second round of the Class AA playoffs.

And also understand that I hold the ASWA in the highest regard because I realize the commitment they make to this process each year while also dealing with an already-heavy workload. And I realize that many of the writers and editors that make up the ASWA did not have the opportunity to see Armstrong play a game this season for the Eagles.

But if you look at the specifics of Armstrong’s resume, it should be a no-brainer:

Armstrong passed for 1,913 yards and rushed for over 1,234, which eclipses Lear’s rushing total. That includes a 172-yard rushing performance in the state title game.

He rushed 198 times and lost just one fumble, scoring 12 touchdowns.

He was 119-of-192 for a 62 percent completion rating with 14 touchdowns against six interceptions.

And there’s this little tidbit as well: he led his team to a State Championship.

If you come into the process objectively, in my opinion, Armstrong’s state title and total yardage supersedes Lear’s year, outstanding though it may be.

I would hope the “scoreboard comparison” didn’t come into play. Clarke Prep beat Fort Dale in Greenville during the regular season 36-28, but the Eagles’ team, at that point, was ravaged with injuries. Plus, it was homecoming. Ask any high school coach in Alabama about how they feel about homecoming and the distractions it brings. And still Armstrong passed for 313 yards and a pair of scores.

Sure, it’s hard to argue against Mark Lear as Back of the Year.

But it’s as equally hard – or harder – to argue that Hunter Armstrong didn’t deserve the award.