In a year that Georgiana relied heavily on its offense, it was the Panthers’ defense that came through during their annual grudge match against McKenzie on an October night in 1989.

Particularly defensive back Torey Taylor. Taylor intercepted a pass in the final minutes of the game to help preserve the victory, but it was his 34-yard fumble return for a touchdown in the third quarter and Gerry Kendrick’s subsequent extra point that allowed the Panthers to win 7-6.

“We didn’t play well,” said Georgiana head coach Durwood Helms after the game. “But I’m just happy we won. Both teams played hard and it was a good game.”

Defense was the game. McKenzie managed 187 yards. Georgiana had just 101.

Tony Cobb took advantage of a Georgiana mistake in the first quarter. The ball was snapped over Kendrick’s head on a punt and the Tigers took over at the 38-yard line.

Cobb raced 18 yards to the six-yard line, then plunged over two plays later.

A missed opportunity in the second quarter would haunt the Tigers. McKenzie drove to the nine-yard line, but Cobb was turned back three times. Chris Merritt’s pass into the endzone was broken up by -who else – Taylor.

Georgiana turned the ball over on downs inside its two-yard line in the fourth, but there was not enough time left on the clock for the Tigers to run a play.

The Tigers finished the year 9-3, dropping a 13-7 game to Excel in the third round of the playoffs.

The Panthers, meanwhile, strung together four straight wins in the post-season, but were bombed 75-0 against Hazlewood in the state title game, a team that included future Alabama players Tarrant Lynch and Antonio Langham. 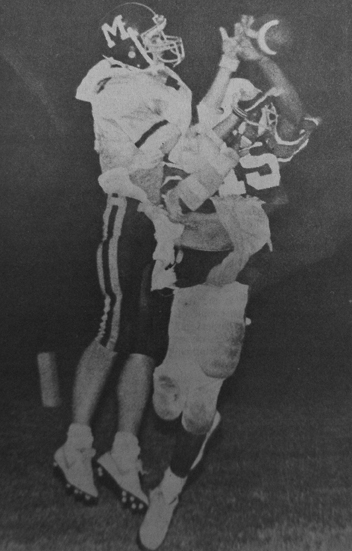