It was historic because the Greenville Tigers had never been there before.

First-year coach Wayne Woodham had Greenville in the playoffs for the first time ever. But they were facing a powerful team on the road in Thomasville. In a defensive slugfest, however, Carl Jenkins’ one-yard touchdown dive with a minute remaining in the third quarter held up as GHS won 7-0.

Greenville’s defense held Thomasville to 146 yards of offense. Jenkins had 65 yards for the Tigers, while Tom Powell added 64.

But it was defense that put Greenville in position to win it. Jimmy Crum picked off a pass and returned it 42 yards to set up Jenkins’ run.

“It was an excellent team effort,” said Woodham after the game. “And I would hate to point out any individual until I study the film. Everyone was ready to play football and simply got after them with everything they had.”

Greenville would lose the next week to eventual state champion Charles Henderson High School, but the Tigers’ 1980 season served as a coming out party.

Greenville, which finished that year 9-3, had arrived. 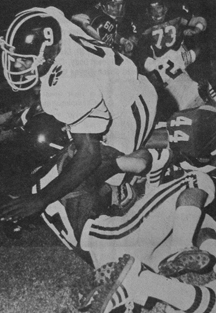 Thomasville held Tom Powell, top, to just 64 yards rushing, but it was the Tigers’ defense that came up big in the game.