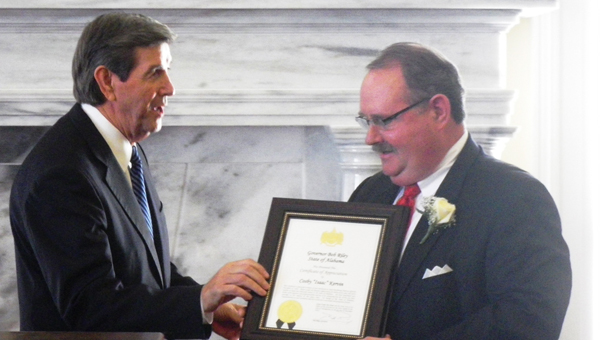 Gov. Bob Riley presents Isaac Kervin with a proclamation recognizing his three decades of service with the State of Alabama. Kervin is the 1971 graduate of McKenzie High School.

Isaac Kervin, a 1971 graduate of McKenzie High School, was recently honored by Governor Bob Riley for more than three decades of state service. Governor Riley presented Kervin with a proclamation at his retirement reception in the Old Archives Room of the State Capitol in Montgomery on Wednesday, December 1.

Kervin was clearly moved by the show of appreciation from Riley and others in attendance, but summed up his retirement from more than 37 years of state service in a light-hearted fashion.
“They say it’s not the circus you’ll miss, but the clowns,” Kervin said. “And I’ll miss all of you.”

Kervin began working as the State Purchasing Director in March of 2003. In this role, he supervised all statewide central procurement and related activities, including the coordination of operation schedules and purchasing process conflict resolution.

For the past ten years, Kervin has been a bi-vocational minister. He has pastored the Tallaweka Baptist Church in Tallassee for the past two years, where he will continue to minister in a full-time pastorate after his retirement, effective January 1.

Kervin began his career with the state in 1971 as a project leader for the Alabama Department of Transportation. He earned a bachelor’s degree in mathematics from Troy University in 1976 and later earned a master’s degree in management information systems, also from Troy.

Kervin and his wife, Jeanna, have one son, Zachary.