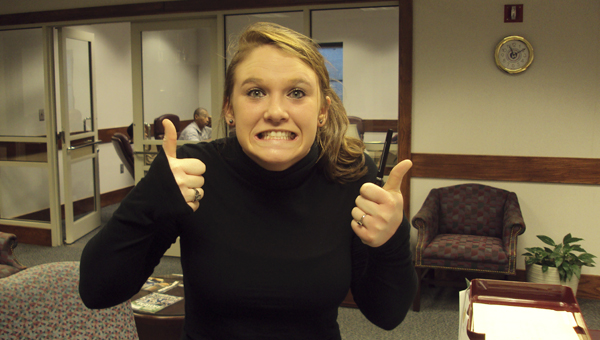 Her parents agreed that this photo, taken at the scholarship sgning, sums up Murphy's fun-loving attitude that she maintains on and off the court.

Murphy Middleton has signed a volleyball scholarship with Southern Union, making her the only player coached by Scarlett Anderson to ever be signed for the sport.

Coach Anderson said Middleton was a devoted player, who always made the best of whatever position she was asked topaly.

“She was good at all aspects of the game,” Anderson said. “You can tell when she loses that it upsets her. She really loves the sport and has passion to win.”

Middleton started playing for Anderson in the seventh grade, but said she got her start at her grandparent’s pasture, where she set up a net and spray-painted a court. Middleton made varsity in 8th grade and the rest was history.  Spiking and digging the ball, Middleton said, are her favorite parts of the game.

She played mainly as an outside hitter for Fort Dale but has been signed as a setter.

“She was shocked to be signed as a setter,” Anderson said. “I told her she will have to work for it, but I have confidence she will succeed and so did Southern Union if they signed her for it.”

Middleton also played basketball and softball for Fort Dale, and made the AISA Volleyball All-Star team as well. In college, she plans on studying ultrasonography to become an ultrasound technician.

“Hopefully this will lead her to bigger and better things,” Anderson said.