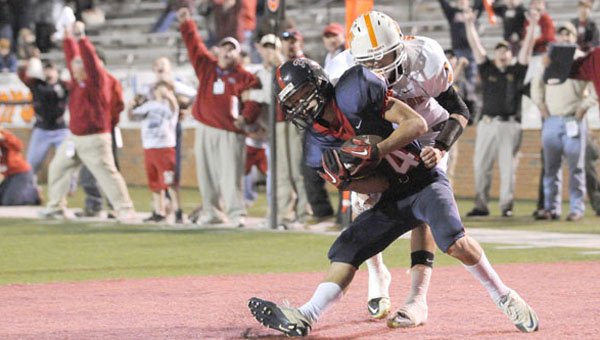 Stud running back Sam Vermilyea throttled the Eagles for five touchdowns as the Vols hung a 40-14 albatross around the collective necks of every player, coach, and fan associated with the Fort Dale football program.

After the game, I asked Eagles’ stats man Keith Taylor if Monroe was as good as the scoreboard indicated.

“Yeah,” he said. “They are. And I don’t like to admit any team is better than mine, but if we played them 10 times they’d probably beat us nine.”

Fort Dale left no doubts on Friday night who the better team was. Monroe Academy went up 33-0 in the first meeting before Fort Dale even managed a score. And when Vermilyea went 39 yards to give his team a 7-0 lead in Troy Friday night everyone – on both sides – might have been thinking, “here we go again.”

Not so fast my friends. Because the Eagles marched the ball right back down the field and responded with a Hunter Armstrong TD. Monroe punched it again and FDA counter-punched, thanks to a clutch six-yard TD catch by Ryan Salter (son of Daniel and our own Tracy Salter – yep, I’m going to give that kid some press).

Halftime. And Fort Dale came out humming in the third, outscoring Monroe Academy 35-7. There was no second half meltdown, not from this bunch, a team that had watched player after player fall by the wayside because of injuries. These kids lost three games during the regular season, but pulled together in the playoffs and won three straight for a championship. That speaks tons. About both themselves and their coaches.

Congratulations to you all. Sampley, whose third trip to the title game was a charm. Daniel Autrey and the assistants. And especially the players, who did something no other Fort Dale team has done in the history of the school: win a football state championship.

And congratulations to Keith Taylor.

Glad we all got to witness it.