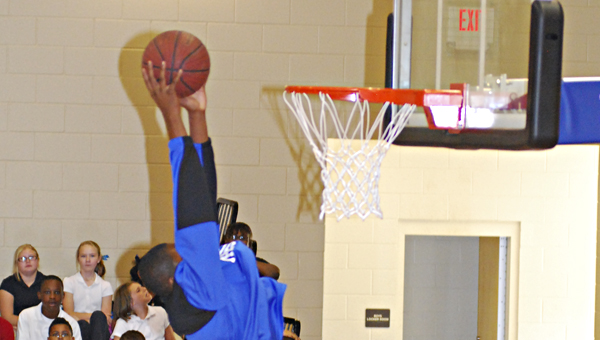 Georgiana got their gym floor shaking on Friday, as the student body packed in to meet and watch this year’s basketball teams.

“Most colleges do a Midnight Madness, and this is our answer to that, even though we are two weeks into practice,” said head coach Kirk Norris.  “We just want to introduce the team and try to get the student body interested in our basketball program.”

Norris said it was also a good chance for some practice for his players.

“It gives them a chance to play in front of a crowd, and get the jitters out before the first game,” Norris said.

The event featured a three-point contest, a slam dunk competition and scrimmages by all three teams.

Keon Binion was the boys three point champ and Jerika Hawkins won the girls competition. Adrian Rich was the winner of the slam-dunk competition.

Norris said he expects big things from this year’s team. He has two returning starters, Rodney Cheatham and Adrian Rich, but his junior class, he said, has been under his leadership for the past four years.

“They know what I want to do, and not to put pressure on them, but I am expecting a lot,” Norris said.

The varsity Panthers will tip off against Luverne Tuesday for their first regular season game.