McKenzie heading to round two 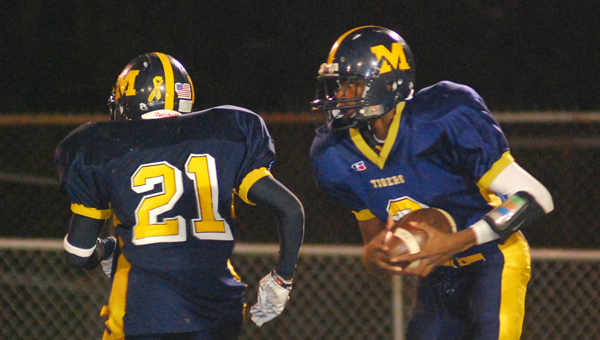 The McKenzie Tigers didn’t roar loud in the first half, but after a redeeming second half, the Tigers ended Marengo County’s playoff hopes 52-12.

Both teams cycled through a few fruitless possessions before Sir Wallace Presley aired it up to Ethan Faust to grab 6. Emmanuel Johnson picked up the two-point conversion to make it 8-0.

After recovering the onside kick, McKenzie again took it for a touchdown, this time with Presley keeping it for himself on a 4 yard run. The two point conversion was no good bringing it to 14-0.

Marengo snuck in 6 before the half, to put McKenzie ahead 14-6 going into the third quarter.

Someone forgot to tell Marengo that the second half had started. Two plays in, cliff pugh took it 64 yards to bring the Tigers to the 9-yard line. Pressley lobbed it to Faust for the touchdown, then back to Faust to grab the two-point conversion, 22-6.

On Marengo’s next possession, a fumble on the 15-yard line was snatched up by Johnson, who took it 85 yards to give McKenzie a stronger lead. Faust again picked up the conversion to bring the tally to 30-6.

Things kept getting worse for Marengo as McKenzie picked up steam. After forcing a punt, McKenzie got it back on Marengo’s 40. It took one play-a 40 yard pass to Chuck Thompson-to add another touchdown. Kendrick Ball sent the PAT through the uprights to make it 37-6.

The Panthers battle in 6 more points off a goaline draw, but McKenzie got it right back off the kickoff. Cliff Pugh took it all the way off the return, with Ball again picking up the PAT to make it 44-12.

One more pass, this time falling into the hands of Chuck Thompson, added the final Tiger touchdown of the day. Final score, McKenzie 51 – Marengo 12.

“I love how our team came together and made this thing happen to finish the game in our style,” Brown said.

The Tigers will face Linden next week, which dealt a solid 48-0 defeat to Kinston on Friday.