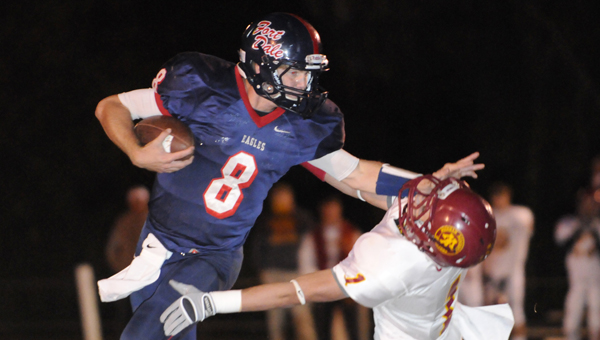 The Fort Dale Eagles will fly on to round two of the playoffs, after toppling Morgan, 30-13 Friday.

Both teams had quiet first quarters, with no points to speak of for either team. Morgan made the scoreboard first with 11:03 left in the second off a 4-yard run giving them an early 7-0 lead.

A few minutes later, Patrick Russell got the Eagles onto the board off a 24-yard field goal. Fort Dale made a gutsy call and went for the onside kick; a gamble that paid off when the Eagles recovered it. Hunter Armstrong ran it in 6-yards to grab the lead, 10-7.

Before hitting the locker room, Perry Singleton hustled in 4-yards to make it 17-7.

With 6:53 seconds left in the third, Russell lined up for another 24-yard field goal. What happened next confused the fans and referees alike. The field goal was blocked, but kept going over the line of scrimmage towards the hands of Morgan’s safety. The ball slipped through his hands and bounced into the end zone, where center Chance Williams jumped on it for another Fort Dale touchdown.

Hunter Armstrong was the leading rusher, with 22 carries for 146 yards, followed by Perry Singleton taking it 133 yards of 16 carries.

Armstrong completed 13 of 20 passes for 203 yards. Eli Blackmon was leading receiver, snatching up 6 grabs for 89 yards.

Stephen Till led the Fort Dale defense, with 12 tackles. Jonathon Scott and Sawyer Reeves both tallied 10 for the night.

The Eagles will play Bessemer next week for round two.