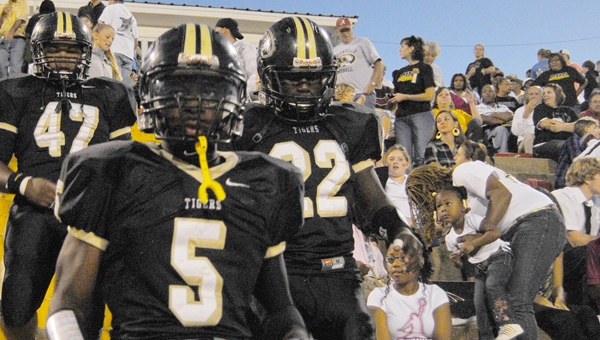 Greenville’s Darius Watson (5) leads the Team Captains, Terrance Thompson (22) and Neil Posey (47), onto Tiger Stadium earlier this season. The Tigers host McAdory in the first round of the Class 5A State Playoffs. Game time is 7 p.m.

Greenville is stepping into the unknown.

While Greenville coaches have an idea of what visiting McAdory will try to accomplish on both offense and defense in Friday night’s first round playoff game, head coach Ben Blackmon said the two teams have no common opponents. Therefore, it’s difficult, somewhat, to judge how well each team matches up against the other.

McAdory enters the game ranked No. 10 in the state.

“They’re really fast,” said Blackmon. “They’re not overly big, but they’re fast and quick. Our kids are excited about this opportunity.”

Greenville will counter with some speed of its own.

Quarterback Kent Riley, a sophomore, leads the Tigers’ offensive attack. Riley has 503 yards passing in 10 games, but it’s his legs that do the most damage to opposing teams. He’s rushed for 860 yards and 15 touchdowns.

But Riley is receiving help from his backfield as well. Jamall Hamilton averages 94.5 yards per game (26 carries, 378 yards) and is a homerun threat at tailback. Michael Watts leads the GHS receivers with 11 catches for 102 yards.

Defensively, another sophomore has stepped up for Greenville. Brian Smith leads all tacklers with 37, including 26 solo stops, out of his linebacker position.

“Our offense is constantly scoring points and our defense gets better every week,” said Blackmon. “Our biggest challenge is a depth issue. We have a good freshmen class, but they just aren’t ready yet.”

The Tigers are seeking their second consecutive win in the first round of the playoffs under Blackmon. Last year’s team went 11-1, losing to region foe Demopolis in the second round at Tiger Stadium.

A GHS victory would likely send the Tigers on the road in the second round this season against Pleasant Grove, which is favored over Selma.