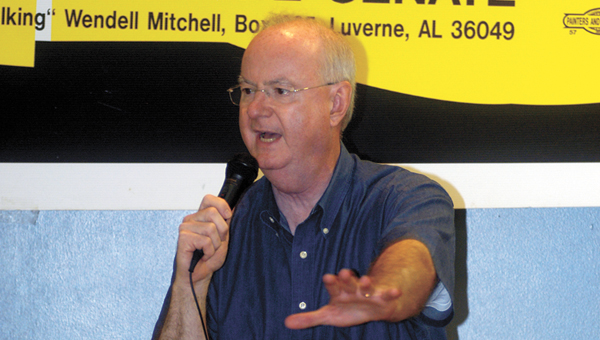 With 99 percent of precincts reporting, Bryan Taylor was declared the winner of the seat held by Mitchell (D-Luverne), who was seeking his eighth term as District 30 Senator, which encompasses Butler, Pike, Crenshaw, Autauga, Elmore and parts of Lowndes counties. Taylor had 23,610 votes to Mitchell’s 17,875.

Mitchell lost in the largely Republican and heavily populated counties of Autauga and Elmore. Also, Taylor, a Prattville native, garnered enough votes in Crenshaw, Butler, and Pike – Mitchell’s base – to win going away. Mitchell won Crenshaw County by just 532 votes, 2,902 to 2,330.

Mitchell’s counterpart in the state House of Representatives, Charles Newton (D-Greenville), held off the challenge of Jerry Hartin (R-Georgiana) in the District 90 race. Newton took 59 percent of the vote to Hartin’s 41 percent.

District 90 is comprised of Butler, Crenshaw and parts of Conecuh counties.

Hartin, a Butler County Commissioner, admitted he was expecting to draw more support from the eastern part of the district. He garnered 2,548 votes in Butler County, or 36.03 percent of the vote, compared to Newton’s 4,516 votes (63.87 percent).

“I honestly thought there would be a bigger turnout out of voters in Crenshaw County,” Hartin said. “I was anticipating better numbers there.”

Hartin said he would not rule out the idea of running for state office again.

“I know I did the best I could do and I think I did pretty well, considering I was up against an incumbent who had been in office a long time,” he said. “Tomorrow is another day – and I feel okay, I do.”

The Butler County Sheriff’s race was over almost as soon as it began. With 27 of 28 precincts or 96.43 percent of the vote, Democrat incumbent Kenny Harden handily defeated Independent candidate Phillip Hartley by a margin of more than 4,000 votes.

Harden admitted he wasn’t surprised by his big margin of victory.

“Based on talking with everyone throughout the campaign, we felt good going into it tonight,” Harden said. “Now, I’m planning to go back to work tomorrow with business as usual for four more years.”

Other races of interest:

– With 63 percent of precincts reporting, Alabama voters were on track to reject Amendment 3, which would have taken $1 billion over a 10-year period from the state trust fund to repair rural roads and bridges.