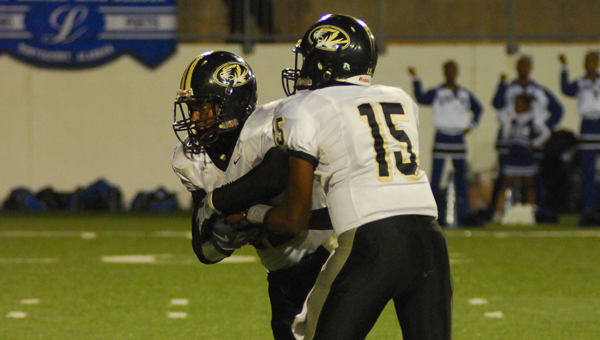 Kent RIley dishes it off to Terrence Thompson during Thursday's game. Thompson claimed 2 TDS for the night. (Advocate Photo/Austin Nelson)

The Greenville Tigers pummeled the Lanier Poets on Thursday 35-16 at Crampton Bowl in Montgomery.

“Our kids came out and got the job done, “ said coach Ben Blackmon. “We finished the season 7-3, so here come the playoffs. Anything can happen.”

Kent Riley grabbed the first touchdown off a quarterback keeper. Dauntavious Smith sent the extra point through to make it 7-0.

Terrence Thompson snatched up a Riley toss on their next possession to double the Tiger’s lead after the extra point, 14-0.

A big forth down sack gave forced a Lanier punt, giving Greenville the ball on their own 15. Riley cut the field in half on a 50-yard toss to Darius Watson. Riley went for the end zone, but the pass was tipped, making a fortunate redirection into the hands of Michael Watts for the third touchdown of the night. The extra point was good and the Tigers went into half ahead 21-0.

Lanier snuck in a touchdown after play resumed in the third, and the Poets managed to convert for two to end the two-quarter shutout, 21-8.

With 6:44 left in the third, Watts grabbed another touchdown, this time as the intended receiver. Again, the extra point was good to make it 28-8.

Thompson broke loose through the middle to grab Greenville’s final points for the night with 3:58 left in the third.

Blackmon said things are all uphill from here.

“Every week from here on out will be a top-ten team, starting with McAdory next Friday at home,” Blackmon said. “They’re good—we will have to bring our A game.”