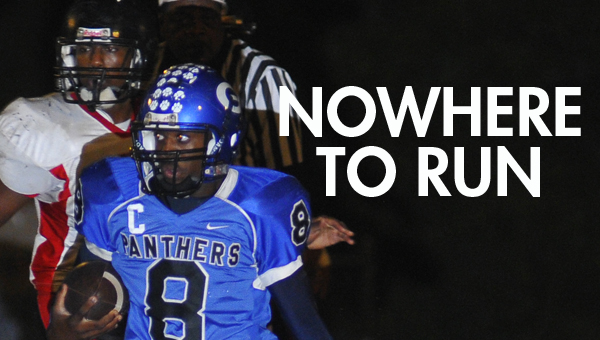 A season that began with so much promise for the Georgiana Panthers ended without a bang on Thursday night. Visiting Hillcrest-Evergreen dismantled Georgiana 49-0 at Harmon Field.

The Panthers end the year with a 1-9 record.

Six games into the season, Georgiana was without first-year coach Shawn Gregory who was dismissed as head coach following a 72-6 loss to rival McKenzie. Georgiana’s lone win came last week against J.F. Shields 48-22.

Gregory remains a teacher with Georgiana.
“It’s been tough on these kids, ” said Georgiana Athletic Director Kirk Norris. “For the most part, they’ve done everything we’ve asked of them and they’ve come out here and fought hard. But when you go from doing things one way to doing things another halfway into the season, it’s hard to overcome.”
Hillcrest-Evergreen led 22-0 primarily on the strength of two long touchdown runs by Jaguars quarterback Justin Nared.

The Panthers had the chance to cut into the lead just before halftime following a missed kick on a kickoff by Hillcrest that gave Georgiana the ball on the Jaguars 35-yard line. The ball was moved to the Jags’ 20-yard line following a pass interference penalty. But two running plays by quarterback Devin Bonner and Rickey Everett went for negative yards and Bonner’s pass to the endzone was intercepted with three seconds left in the half.

Hillcrest opened up its lead in the second half as Georgiana was unable to produce any points offensively. Things were working so well for the Jaguars that their extra point attempt following a long touchdown run was line drive straight through a Georgiana players outstretched arms. The ball smacked the upright and sailed over.

Junior varsity players played most of the fourth quarter for Georgiana.

Norris, who serves as athletic director, said the school would begin accepting applications for the head football job soon.

“I don’t really want to put a timetable on that right now,” he said. “Hopefully, we can get someone in here before spring so they can get to know the kids and go through spring training with them.”