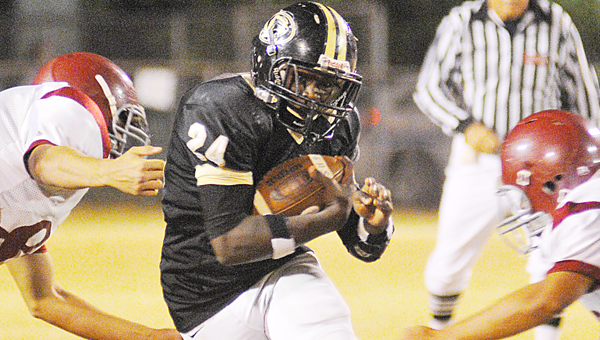 Following Greenville’s 31-28 loss to Selma on the road last week, head coach Ben Blackmon had a simple wish for his players this week against Brookwood:

“I told them I hoped they hated us so much as coaches that they took it on the other team,” said Blackmon.

The message was clear: practice was hard this week and it wasn’t fun to be a Greenville football player. Greenville jumped out to a 21-0 lead against Selma, but let the Saints back into the game and eventually lost.

The coaches were trying to prevent that from happening again on Friday night.

This week was about regaining focus, said Blackmon.

“We kind of had to regroup – both the coaches and the players,” said Blackmon. “We went back and looked at the film from last week and we shut it down offensively in the game, but we also made some mistakes. Tonight, though, the kids came in focused and I’ve got to give them credit, because their backs were against the wall and they came out fighting.”

Literally, the Tigers backs were against the wall. Unbelievable considering the Tigers overall record, but a loss to Brookwood would have eliminated Greenville (6-3) from playoff consideration.

And how crazy is this? The Panthers are just 3-6, but one of those victories was a 22-14 win over Selma.

Meanwhile, Demopolis beat Selma 20-14, which assured Greenville a second place finish in Region 3 and a first-round playoff game at home when the playoffs begin in two weeks.

The Panthers scored on a long touchdown run first, but it was wiped out because of penalty. After that, it was all Tigers.

Fernandez Grey scored on a one-yard touchdown run then followed that with a 50 yard sprint for a score after the defense had stuffed Brookwood on fourth down.

The Tigers led 14-0 when Tijuan Rudolph took a punt 67 yards for a touchdown. Darius Watson then hauled in a 17-yard scoring pass in the second quarter and quarterback Kent Riley added another touchdown.

The Tigers defense would add a safety before halftime.

Freshman Dontae Lee scampered 33 yards to set up his one-yard touchdown run early in the third quarter for Greenville.