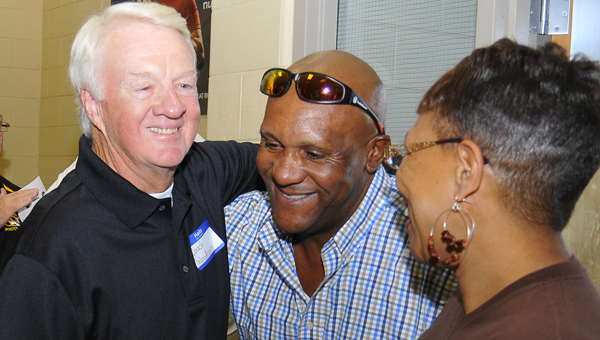 Former Greenville High School Coach Wayne Woodham greets former player Tom Powell at a reception held in Woodham’s honor on Friday at GHS. Powell was an All-SEC defensive back at Auburn following a stellar career at running back for Woodham. A number of former players, assistant coaches and GHS supporters turned out to greet Woodham, who led the Tigers to their first playoff game in 1980, his first season as head coach. Right, Powell’s wife Nancy looks on. (Advocate Staff, Kevin Pearcey)

Wayne Woodham will always hold a special place for those in Greenville whose hearts beat Black and Gold.

Woodham turned the Tigers into a terror on the football field.

Since a perfect 10-0 campaign by Coach Luke Whetstone’s squad in 1955, Greenville’s proud football teams had experienced just five winning seasons in a 25-year span. When Woodham arrived in 1980, he inherited a program that had gone 30-65-4 over the last decade, which included seven losing seasons and a 1-8-1 record the year prior.

Tom Powell was on that team. But when Woodham, who was hired away from Eufaula where he had won a state title as a defensive coordinator, addressed his players, Powell knew the Tigers were headed for a turnaround.

“His work ethic, for one thing,” said Powell, who went on to become an All-SEC defensive back for Pat Dye’s Auburn Tigers. “Day one, when he came in we started working. And never looked back. He had everything planned out for us and once we started believing in him as a team, we never stopped.”

Powell agreed with Woodham, who addressed a crowd of former players and coaches at a reception Friday afternoon at Greenville High School.

Woodham remembered each and every player that approached him. He said he had stories about every player, every coach, every game, and even every water boy, (Woodham’s grandchildren, also attending, sported their father Dan’s old GHS jerseys, worn by all team water boys in those days).

“But we would be here all night if I started naming names,” Woodham said.

And every player had a memory. Mike Lynch was a quarterback when he transferred to GHS from Fort Dale. Woodham turned him into an all-state linebacker.

“He looked at me and told me, ‘you’re going to be a linebacker,’” said Lynch. “I thought, ‘I’m going to get killed.’ But that’s what a leader does. He sees something in you that you don’t see in yourself.”

The old defensive coach built those GHS football teams on defense and the running game. The effects were immediate: after surrendering 185 points in 1979, the Tigers gave up only 95 in 1980.

In contrast, the offense had only totaled 51 points in ’79.

“Our offensive linemen would get mad at me when I called for a pass, because they didn’t get to hit anyone,” said Woodham.

Woodham reached out to the community as well.

Greenville Mayor Dexter McLendon said he was at a baseball game at Day Park when Woodham sat down beside him.

“He said he’d seen me out there talking to all the kids and he wanted me to be a part of the football program,” recalled McLendon. “I said ‘coach, I don’t know about that.’ And he said, ‘why not?’ I said, ‘because ya’ll ain’t no good.’

But Woodham convinced McLendon, who became the statistician for the team.

Two weeks into the season, McLendon knew Woodham would fulfill his promise. A big underdog against T.R. Miller, a 77-yard punt return by Alvin Briggs (who would follow Powell to Auburn and Woodham as coach at GHS) secured a 6-0 win for the Tigers.

“I still get chills thinking about it,” said McLendon.

Woodham compiled a 61-14 record at Greenville. The Tigers made the playoffs every year except once during his tenure, including his first season and the first time ever for the school. The 1984 team lost the championship game to Emma Sansom 10-7 in overtime. Dye was in attendance as was then-Alabama head coach Ray Perkins, both to watch Rebels’ running back Gene Jelks (who would eventually sign with the Tide). What they saw was a defensive slugfest, both teams tied at 7-7 after regulation.

On Greenville’s first overtime series, McLendon and many former players still say running back Marvin Patterson crossed the goaline on a third down play. When fullback Johnny Powell was stopped on a fourth down plunge, the Rebels booted the field goal on the next series to win it.

But even in defeat Woodham’s Tigers, a five-touchdown underdog, had earned the respect of the state.

“Whenever someone in Alabama asks where I’m from and I say ‘Greenville,’ they hesitate for a moment, then say, ‘great football team,’” he said.