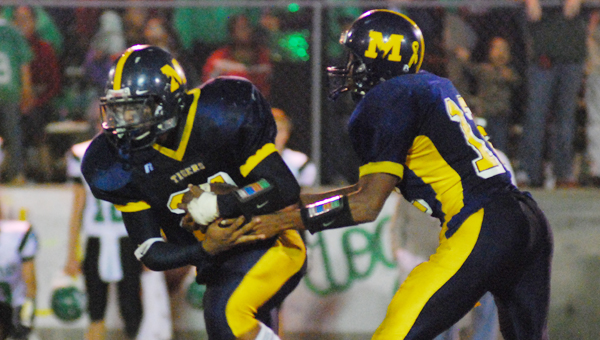 Emmanuel Johnson dishes it off to Xavier Smith during Friday's game.

Someone finally did it. No. 6 McKenzie upset defending Class 1A state champion and No. 1 Brantley 18-12.

Until Friday, Brantley had enjoyed one of the most formidable records in Alabama High School Football, with 62 region wins in a row and eight consecutive region titles.

The win touched off a jubilant celebration at Williams-Vickery Field. The Tigers hadn’t beaten Brantley since 1996 and had suffered nine straight losses to their region rivals since.

Tigers head coach Miles Brown, hired in 2006, had been a part of four of those losses. The Bulldogs had outscored Brown’s Tigers 213-69 in those four games.

But Friday night, Brown and McKenzie finally had an answer for Brantley.

“To me this is what small town football is all about,” said Brown. “This school, these players, and this community need to enjoy this.”

Both offenses came in averaging lots of points (McKenzie 48 per game, Brantley 44), but the game was a defensive struggle throughout.

Brantley jumped to an early lead off a 70-yard run by Devontae Porter, failing to score any points-after.

McKenzie would answer on their second possession with a defensive touchdown when Matt Lewis recovered and ran back a fumble to tie it up. The Tigers kick was no good, McKenzie 6-6.

Brantley had a hard time gearing up their offense, and were forced to turnover on downs, giving the Tigers the ball on their own 20.

Emmanuel Johnson broke out for a 20 yard run to start the drive, with 11 yards from Sir Wallace Presley and 10 from Cliff Pugh to advance down the sideline.  A fake run left Pugh wide open and Pugh grabbed six more to make it 12-6, which it would remain until half.

McKenzie came out of the locker room with a vengeance, with Presley picking up 57 yards and then taking it to the end zone on the very next play. McKenzie led 18-6.

After a round of punts from both teams, Brantley managed to grab another six off a goal line crash.

Brantley had one more chance to score, but a big tackle by Kendrick Ball kept the Bulldogs from gaining ground and they were forced to punt it away.

Johnson added another touchdown for McKenzie with 2:15 left in the final period, but it was called back due to penalty.

“We got next week off, so we are going to come in and work on us, work on preparing for the playoffs,” Brown said.