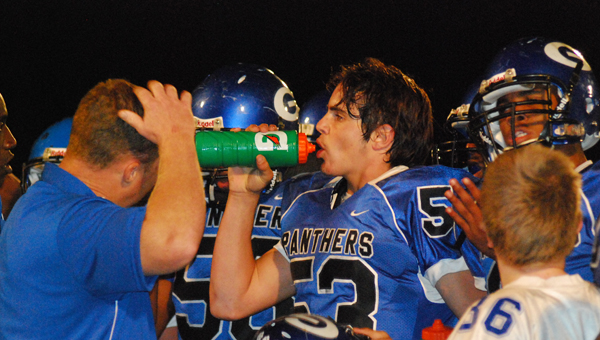 Georgiana grabbed their first win of the season in a solid defeat of J.F. Shields, 48-22.

Shields first possession started off good, with them pushing all the way into the redzone. A defensive stand by Georgiana however got momentum flowing the Panther direction.

De’Kendre Binion solidified the momentum swing with a 3-yard touchdown with 5:26 left in the first. Ethan Hartley picked up the conversion to make it 8-0.

Shields answered with a touchdown, but failed to grab any extra points, 16-6.

With 9:53 left in the second, Everett charged in 8-yards for 6, but the Panthers failed to convert. With 1:13 left in the second quarter, however, they would get another chance when Binion picked up 8 for the TD. Adrian Paige snatched up the reception for two, Georgiana 30-6.

Binion scored again on a short run, failing to convert making it 36-6. Latrell Seals made it 42-6 off a 27-yard rush with Chance House grabbing the final touchdown, 48-14.

Most of Shield’s points came after Georgiana made the move to put in the younger squad. The final score ended 48-22.

“I felt like we played a total game, all aspects, offense, defense and special teams,” Norris said. “Once we scored the first two, we just stayed in it and kept our foot on the accelerator.”

Norris said the team benefited from having senior Adrian Paige back off the sidelines.

“Getting Paige back helped us by having him in the game, but also by having that senior leadership back in the huddle,” Norris said.

Everett was the leading receiver with 1 reception for 18 yards, followed by Travales Smith with 1 for 14 yards.  Most of the action, however, happened on the ground. Binion had 12 carries for 151 yards with Everett tallying in at 89 yards off 6 carries. The Panther’s total offense was 303, with 270 yards rushing and 33 yards passing.