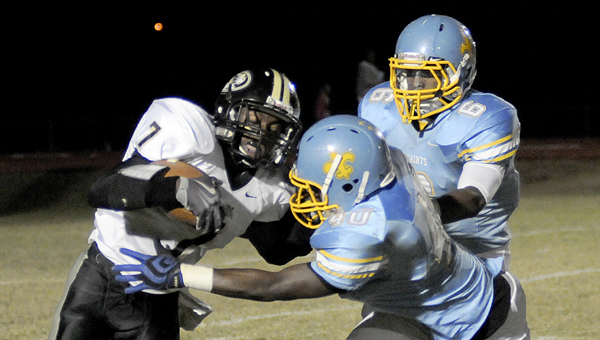 By BRIAN TYNES
The Selma Times-Journal

SELMA — Selma needed a big play and Demarcus Thompkins delivered.
Thompkins took the opening kick of the second half and raced 90 yards down the middle of the field for a touchdown.
It didn’t give the Saints the lead, but energized the team and the crowd enough to propel the Saints to a 31-28 win over the Greenville Tigers Friday at Memorial Stadium and in the process guaranteed the Saints a playoff berth.
“I felt like I had to step up,” Thompkins said. “We didn’t do a good job scoring on offense so we needed to do something on special teams.”
Thompkins also had a 50-yard return later in the game that set up the final score, a one-yard run by J’Varrius Culpepper.
“At halftime we talked about taking the kick and sticking it down their throats,”
Selma head coach Leroy Miles said. “We were able to do that. He just electrified this crowd.”
Thompkins fielded the ball at the 10 and split a seam in Greenville coverage thanks to blocks by Keenan Woods and Alexander Burton.
Coming off a loss to Brookwood last week, Miles said he emphasized trusting the coaches and each other and the players bought into the philosophy.
It’s one of the main reasons why Selma was able to erase a 21-0 first-quarter deficit.
“They showed me tonight what their character is all about,” Miles said. “Being able to rally back says a lot about them. This is the caliber ballgame we want to be in. This is championship football.”
Greenville coach Ben Blackmon was frustrated because of the environment in Memorial Stadium, but declined to discuss specifics.
“Selma is tough and this is what you have to deal with when you come here,” Blackmon said.
Blackmon could have also been frustrated from the loss, but more likely from the fact his team looked to dominate the Saints in the early going.
Greenville raced out to a quick 21-0 first quarter lead thanks to a quick running attack and taking advantage of Selma mistakes and turnovers.